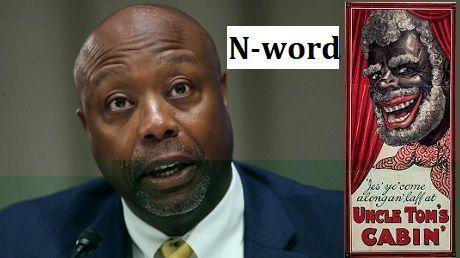 Republican Tim Scott Challenges Systemic Racism Lies. “I’ve also experienced a different kind of intolerance,” he said. “I get called ‘Uncle Tom’ and the N-word — by progressives, by liberals”!

Sen. Tim Scott (R-SC) noted during his response to President Joe Biden’s address Wednesday evening that the left frequently attacks him by calling him racist names.

“I’ve also experienced a different kind of intolerance,” he said. “I get called ‘Uncle Tom’ and the N-word — by progressives, by liberals”!

Scott referred to a recent Washington Post “fact check” of his claim that he grew up in an impoverished family.

“Just last week, a national newspaper suggested my family’s poverty was actually privilege … because a relative owned land generations before my time,” he said.

Scott called for “common ground” on America’s discussion of race, noting that children should be taught they should be treated equally, no matter the color of their skin.

He accused the political figures and corporations of using racial divisions in America to gain more power.

“Hear me clearly: America is not a racist country. It’s backwards to fight discrimination with different discrimination,” he said. “And it’s wrong to try to use our painful past to dishonestly shut down debates in the present.”

Scott’s comments on race predictably earned him criticism from leftists on social media.

Twitter allowed the topic “Uncle Tim” to trend throughout the evening and even into Thursday morning, sparking anger from Republicans:

"Uncle Tim" is trending on Twitter right now because apparently it's okay to use racist epithets as long as they're directed at a Republican.

Bigotry should always be denounced. Biden & Democrats should denounce the disgusting use of "Uncle Tim”! pic.twitter.com/Lw01wgLYxX

Hey @jack and #Twitter @verified WHY are you allowing "Uncle Tim" to trend on your platform? This is hate speech plain and simple against @SenatorTimScott You would never allow this to happen if it was being levied against a liberal politician. #Hypocrites