White House: 'Trump voters are a threat to our democracy' 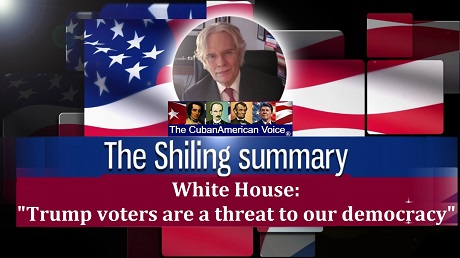 White House: 'Trump voters are a threat to our democracy'.

Why shouldn't one vote for Biden? Podcast: Why shouldn't one vote for Biden?. Hosted by Julio M. Shiling, where he summarizes the three main reasons why you shouldn't vote for the corrupt candidate Joe Biden for President of the United States, broadcasted LIVE on October 30, 2020.

The first one is influence peddling, there has not been so much corruption of a family since the Clintons, it really is scandalous proportion that Biden in effect the Biden cartel by using the influence of the then vice president's name. In eight years has amassed his family which includes: his son, his two brothers, his sister, his daughter and her husband. Juicy contracts with China, Russia, Ukraine, Iraq, Costa Rica, Jamaica and of course the United States government.

Continue Reading …Why shouldn't one vote for Biden? “The Shiling summary” is an abbreviated podcast hosted by Julio M. Shiling which seeks to delve into political, social and cultural ideas, concepts, topics and news, conducting a rigorous examination and analysis while maintaining strict adherence to time. As its name suggests, the podcast will render a synoptic context in each program. Excluding interviews and special programs with guests, “The Shiling summary” will offer an opportunity to absorb information and knowledge in an entertaining and pleasant manner. Do not miss it!