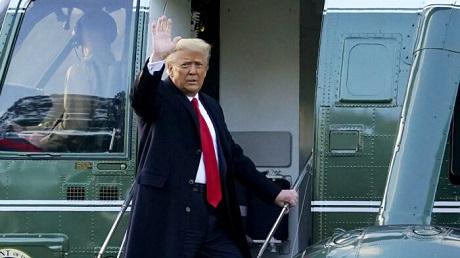 Around half of Republican voters would abandon the GOP if former President Donald Trump created a new party, according to a new poll.

About 46 percent of Republican respondents said they would abandon the Republican Party to join a Trump-backed party, a Suffolk University–USA Today poll found. Only 27 percent said they would stay with the party, while the rest were undecided.

“We feel like Republicans don’t fight enough for us, and we all see Donald Trump fighting for us as hard as he can, every single day,” a Republican and small-business owner—who wasn’t identified—from Milwaukee told USA Today. “But then, you have establishment Republicans who just agree with establishment Democrats and everything, and they don’t ever push back.”

A recent Hill-HarrisX poll reported that 64 percent of Republicans said they would either join or might join a “MAGA Party” or “Patriot Party” led by Trump. Thirty-six percent of respondents said it would be more likely for them to stay with the Republican Party.

“If Trump were to split from the GOP and create his own party, polling suggests he might well create the second largest political party in the country, knocking the GOP down to third place,” Dritan Nesho, CEO and chief pollster at HarrisX, told Hill.TV.

The recent slate of polls and their findings suggests that Trump still enjoys overwhelming support among Republican voters and will likely remain a mainstay in the party. The former president hasn’t formally declared whether he will run for president in 2024; he has said that he would support GOP primary candidates who espouse his “Make America Great Again” ethos.

Meanwhile, the former president is currently embroiled in a war-of-words with Senate Majority Leader Mitch McConnell (R-Ky.). McConnell had suggested in an opinion article that Trump could face criminal prosecution for his Jan. 6 speech, prompting Trump to issue a blistering missive against the Kentucky Republican’s leadership.

Trump is scheduled to speak at the Conservative Political Action Conference on Feb. 28. A senior adviser, Jason Miller, told Fox Business over the weekend that the former president will focus on fighting against Big Tech monopolies, standing up to the Chinese Communist Party, and creating jobs.