Trump Thanks Team After Acquittal 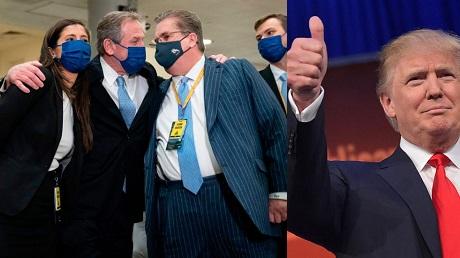 Trump Thanks Team After Acquittal.

President Trump praised his supporters for standing by his side during what he said was “the greatest witch hunt in our nation’s history.” In a statement Thursday, the President thanked his defense team and GOP lawmakers for helping to preserve the rule of law and America’s constitutional rights.

“Our historic, patriotic and beautiful movement to Make America Great Again has only just begun. In the months ahead I have much to share with you...” pic.twitter.com/uDFydj7Xy0

The 45th President said it’s sad to see a political party excuse itself from civility and attempt to cancel those with opposing views.

NOT GUILTY. Now maybe it would be nice if the senators stopped putting on show trials for free air time and actually started working for the American people for a change.

“Now, maybe that they’ve gotten all of the nonsense hopefully out their system, the Democrats can actually go back to doing some work in the Senate,” the 45th President’s eldest son said. “All of the Senate was pushed through this nonsense.”

In the meantime, some citizens voiced their opinions against the partisan efforts.

“I feel like that was a huge waste of tax dollars and American people who are suffering,” Michigan resident Jessica Kurlyowich stated. “They wasted millions and billions of dollars on something that they…ultimately knew that they were going to fail.”

Trump supporters across the country also spoke out and said President Trump had no role in the January 6 events on Capitol Hill.

“I think it’s great because the President did not incite a riot at the Capitol, he told the American people to come peacefully and patriotically,” Michigan resident Vance Sellers said. “They chose to break the law.”

In light of the outpour of support, President Trump said the MAGA movement has just begun and added he looks forward to revealing what his next endeavors are in the coming months.