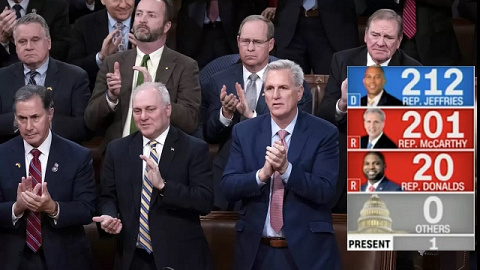 2023 has started with considerable fireworks in American politics. As of this writing, 6 attempts have been made on deciding who will hold the speakership of the U.S. House of Representatives. This is the third most important position in the nation’s political power arrangement, hierarchically speaking. Is this necessarily bad? Does it mean the Republican Party is in disarray? Is there historical precedents for this apparently awkward situation?

Modernity and systemic alterations have gotten us used to uniformity in these types of political courses. The U.S. presidential system, with its divided governmental design, seeks to separate power within the federal state’s composition. The American Framers purposely structured this model to remedy expected factious battles that, in the end, would require consensus. In other words, it is the bland uniformity that we have become accustomed to in previous congressional speakership elections, as well as national political conventions where state electors had certain autonomous powers to bypass party kingmakers that planned coronations instead of competitive contests that better express popular sovereignty.

The Democratic Party is, in fact, wholly united. This, however, is not necessarily a good thing. A strong argument can be made that Democrats are today more in line with the Leninist party concept than most parties in functioning democracies around the globe. Watching how the Democrats vote mimics voting sessions in communist Cuba, China, and Putin’s Russia. Barack Obama can be thanked for that. Their choice for speaker, Hakeem Jeffries, a left-wing election negationist, coherently represents them and speaks volumes of the Democrat's commitment to radical politics. Republicans, on the other hand, reflect greater ideological diversity. The party of Lincoln (GOP) is serving pluralism in much ampler proportions.

In 1856, the House voted 133 times, in a period of over 2 months, before a speaker was elected. House members voted in 9 sessions, in 1929, before deciding upon who would occupy the position. In the case of the 1856 speaker election, a Congress divided over the seminal issue of slavery was the principal point of contention. Has this not been the case where, ultimately, the antislavery leadership won over, the Civil War may have begun 5 years earlier without the benefit of having a president like Abraham Lincoln in the White House.

Republicans have reason to distrust Kevin McCarthy. No one is entitled to anything in politics. While the GOP did win a majority in the House in the 2022 midterm elections, it was clearly not with the margins that they should have been. Considering that Joe Biden is the most unpopular president in decades, sky-high inflation, lawlessness in many cities, a grueling crisis in the southern border where 90% of the drugs that enter the U.S. come through, the Republican “victory” produces mixed emotions. McCarthy was at the helm of that episode.

In the end, consensus will prevail, a Republican speaker will be chosen, and the American Republic will be better for it. This anomalous chapter, believe or it, is a signal of life in a system many have come to believe was without vigor. Conformity and homogeneity in politics breeds civic apathy. That is not what the Founding Fathers wanted. A virtuous society capable of self-government is served when their representatives hold the system accountable and are daring, within constitutional bounds. Clearly, this is the case now. Enjoy this moment in history. It may not be repeated for a long time. New Right or Trumpism?A New Right had been forming before, and increasingly since 2016. Broadly speaking, it is soundly Conservative with Classical Liberal undertones in the economic sphere. “Trumpism” is a concept commonly being tossed around these...