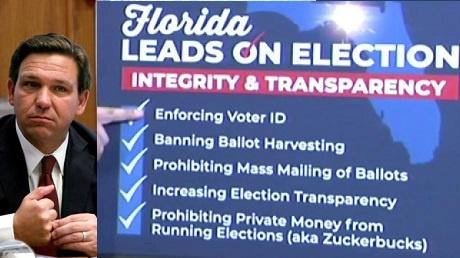 The legislation would place limits on who can return a finished mail-in ballot and prevent election officials from entering consent agreements; it would also require voters to submit yearly requests for mail-in ballots, according to the text of the bill.

“Drop boxes must be geographically located so as to provide all voters in the county with an equal opportunity to cast a ballot,” the bill states, adding that they “must be monitored in person.”

The “prohibition on the use of private funds for election-related expenses” is an apparent response to Facebook CEO Mark Zuckerberg and other groups having provided funding to some states and locals last year to help run elections. Republicans have expressed concern that the funding mostly targeted Democrat-aligned areas and hurt the GOP.

“Me signing this bill here says: ‘Florida, your vote counts. Your vote is going to cast with integrity and transparency, and this is a great place for democracy,'” DeSantis said on May 6.

Several Democrat-aligned groups, corporate news outlets, and corporations panned the bill as being unfairly restrictive, while the NAACP and Common Cause have stated they would immediately file a lawsuit in court alleging that it disenfranchises black, Latino, and disabled people.

“We’re actively trying to suppress people’s right to vote,” Democratic state Rep. Michele Rayner said on April 28 on the state House floor, alleging the measure would be the “revival of Jim Crow in this state,” without elaborating or providing evidence for the claim.

Democrats have been unilaterally opposed to the election measures signed by DeSantis and Republican Georgia Gov. Brian Kemp, as well as bills that are currently being debated in Texas and Arizona. After Kemp signed Georgia’s bill several weeks ago, multinational corporations such as Delta and Coca-Cola—and their CEOs—echoed claims made by Democrats saying the bill would disenfranchise minority voters, prompting calls from Republican lawmakers to reject funding from such companies.

Kemp and Republicans also said that Democratic talking points about the Georgia bill were misleading, saying, “It’s easier to vote in Georiga” with the new law “than it is in New York.”

Minutes after DeSantis signed the bill, election attorney Marc Elias said his team filed a lawsuit challenging the bill on behalf of the League of Women Voters of Florida, the Black Voters Matter Fund, and the Florida Alliance for Retired Americans.

“SB 90 does not impede all of Florida’s voters equally,” the lawsuit alleged. “It is crafted to and will operate to make it more difficult for certain types of voters to participate in the state’s elections, including those voters who generally wish to vote with a vote-by-mail ballot and voters who have historically had to overcome substantial hurdles to reach the ballot box, such as Florida’s senior voters, youngest voters, and minority voters.”

But conservative groups praised the measure.

“Governor DeSantis has led the fight for election integrity reforms in Florida every step of the way. We applaud the governor for signing SB 90 this morning, a strong bill that will ensure it remains easy to vote and hard to cheat in the Sunshine State,” Jessica Anderson, the executive director of Heritage Action, said in a May 6 statement.