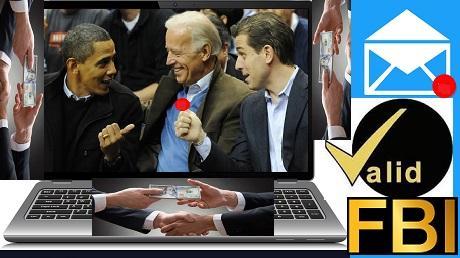 The FBI has confirmed that the emails leaked from Hunter Biden's laptop hard drive are, in fact, "authentic," and not part of a "Russian disinformation campaign" as claimed by Democrats and their media allies.

Federal officials have now reportedly seized the laptops at the center of the leaks that allegedly belong to former Vice President Joe Biden's son.

On Tuesday, senior FBI officials told Fox News that the bureau is now in possession of the computer containing emails that allegedly implicate Joe Biden in his son's foreign business dealings during his time as VP.

Insiders said both the Department of Justice and the FBI have concurred with U.S. National Intelligence Director John Ratcliffe's Monday assessment.

Ratcliffe confirmed that the files are genuine and noted that claims from Democrats, such as Rep. Adam Schiff (D-CA), that they are part of a "Russian disinformation" scheme, are false.

Democratic House Intel Chair Schiff claimed the documents were a "smear" on Biden that came "from the Kremlin" but Ratcliffe says no such intelligence to support that allegation exists.

Law enforcement sources also reportedly confirmed the emails in question, which includes one in which Ukrainian official Vadym Pozharskyi thanked Hunter for inviting him to meet his father, were real.

The FBI however has declined to confirm whether or not it is examining the laptop and its contents.

In a letter to Senate Homeland Security Committee Chairman Ron Johnson on Tuesday, the FBI said it would not be commenting on Ratcliffe's remarks.

"Regarding the subject of your letter, we have nothing to add at this time to the October 19th public statement by the Director of National Intelligence about the available actionable intelligence," the bureau said.

"If actionable intelligence is developed, the FBI in consultation with the Intelligence Community will evaluate the need to provide defensive briefings to you and the Committee pursuant to the established notification framework."

The president said Hunter's leaked emails have exposed "major corruption" that must be investigated.

"We've got to get the attorney general to act," Trump said when asked about naming a special counsel on "Fox & Friends."

"This is major corruption and this has to be known about before the election," Trump said in the call-in appearance on the network.

On Monday, DNI John Ratcliffe said Hunter Biden's laptop "is not part of some Russia disinformation campaign" as he blasted Adam Schiff for saying dirt on Trump's rival came from the Kremlin.

He confirmed that the FBI has the laptop but did not comment on whether they are investigating its contents.

Ratcliffe accused Schiff of having "politicized" the intelligence community – and responded to Schiff's claim about the mysterious laptop that former New York City Mayor Rudy Giuliani says he obtained from a Delaware computer repair shop owner.

Its contents, which Giuliani provided to the New York Post, include emails purporting to show business ties between Joe Biden and his son, who in documents looks to be seeking to cash in on his father's former position as vice president in Ukraine and in China.

"It's funny that some of the people that complain the most about intelligence being politicized are the ones politicizing the intelligence," Ratcliffe told Fox Business on Monday.

"Let me be clear: the intelligence community doesn't believe that, because there is no intelligence that supports that.

"And we have shared no intelligence with Chairman Schiff, or any member of Congress that Hunter Biden's laptop is part of some Russian disinformation campaign. It's simply not true."

However, he also said that the FBI, which is part of the intelligence community, was in possession of Hunter Biden's laptop.

"The FBI has had possession of this," Ratcliffe said.

"Without commenting on any investigation that they may or may not have, their investigation is not centered around Russian disinformation and the intelligence community is not playing any role with respect to that."

Giuliani provided the Post with a subpoena for the laptop dated December 19, 2019, an indication it has been in the bureau's possession for months.

The Post reported, based on an email said to be included in the laptop, that Ukrainian official Vadym Pozharskyi had sought a meeting with the elder Biden in 2015.

"Dear Hunter, thank you for inviting me to DC and giving an opportunity to meet your father and spent some time together. It's realty [sic] an honor and pleasure," the email said.

However, the email did not state that the two actually met, and the Biden campaign responded that "we have reviewed Joe Biden's official schedules from the time and no meeting, as alleged by the New York Post, ever took place."

Joe Biden and his campaign both refused to comment on whether an "unofficial" may have taken place, however.

On Tuesday, documents emerged that appeared to show Hunter Biden's signature on a receipt from a Delaware computer shop where he dropped off laptops that included details of his international business deals.

The receipt from The Mac Shop in Wilmington apparently shows Hunter had signed off on repair work on three MacBook Pro laptops for $85, according to Fox News.

However, the signature has not been verified.

Without offering a shred of evidence, Schiff told CNN that "We know that this whole smear on Joe Biden comes from the Kremlin."

"That's been clear for well over a year now that they've been pushing this false narrative and the vice president and his son. ... pushing this Kremlin narrative is pretty breathtaking. ... and the president is only too happy to have Kremlin help to amplify it."