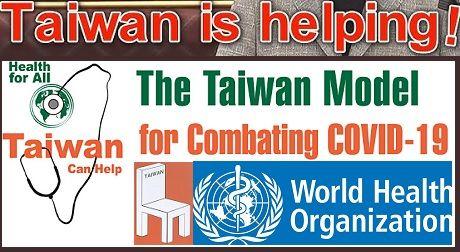 Despite the staunch support of diplomatic allies and like-minded nations, Taiwan was again not invited to the World Health Assembly (WHA) as an Observer in 2020, and the slight improvement it saw in its technical participation in WHO falls far short of meeting its practical needs. The COVID-19 pandemic ravaged the world, exacting a heavy and extensive toll on the health and lives of humankind. Taiwan’s success in confronting the disease is unsurpassed.

The entire world has spared no effort in fighting the disease: to date, more than 100 million confirmed cases have been recorded and nearly three million precious lives have been lost. Since World Health Organization (WHO) Director-General Tedros Adhanom Ghebreyesus declared the COVID-19 outbreak a Public Health Emergency of International Concern (PHEIC) one year ago, calls have continued to come loud and clear from all parts of the world stressing the importance of a united fight against the virus.

The Taiwan Model, based on the democratic experience of COVID-19 containment, has come to set an excellent example for the rest of the world. The government of Taiwan has earned global recognition and acclaim for the series of actions it has taken to show that “Taiwan can help, and Taiwan is helping.”

The pandemic has further strengthened international affirmation of the importance and imperative need for Taiwan to participate in global cooperation mechanisms for disease prevention, leading to unprecedented support for its participation in WHO. During the two WHA sessions held in May and November 2020, exhortations for WHO to welcome Taiwan into its fold came from leaders and high-level government officials of numerous countries, including the United States,

Japan, Canada, Australia, New Zealand, France, the United Kingdom, Germany, Denmark, the Netherlands, and Sweden, as well as more than 1,700 parliamentarians of more than 80 countries. International media also published more than 3,500 reports and articles backing Taiwan. These developments reflect a significant increase in Taiwan’s international visibility and the growing support it has received.

No country can fight a pandemic alone. International cooperation is the only path to epidemic prevention and control. Taiwan’s formal inclusion in the established scientific bodies of cooperation and leadership for world health standards is too necessary and too obvious, for it to be ignored. We sincerely urge WHO to uphold the principles of professionalism and neutrality and include Taiwan in related WHO meetings, activities, and mechanisms.