"Juntas de Vecinos": Symbol of the Reterritorialization of the Left 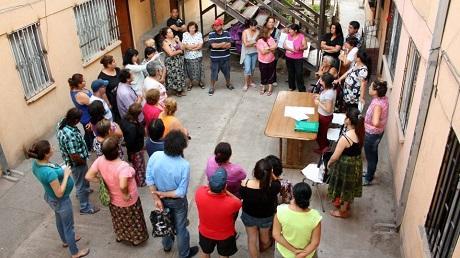 "Juntas de Vecinos": Symbol of the Reterritorialization of the Left.

The human being who has always lived inserted in groups, starting from the most rudimentary groupings; from the hordes to the most complex communities. From the Paleolithic to the present day, human beings need to be gregarious.

The first group was the clan, composed of family ties, the clans were consanguineous groups, they shared a common place of residence.

Later groups of clans were transformed into tribes. Beginning with primitive tribes, human groups gradually developed into successive orders of human government that have appeared and disappeared, until they were embodied in the forms of civil and social regulation that characterize humanity today.

Today, community is understood to be a group of individuals who have certain elements in common: geographical location (a neighborhood, for example), language, customs, values, social status, etc. In general, in a community a common identity is created, and this is united to face a need or achieve a goal, which may be a common good. This common goal is precisely the basis of what the current Neighborhood Councils are.

This is what we call the community and it is also made up of these entities that provide us with their services; stores, greengrocers, bakeries, kindergartens and schools, the neighborhood square, the sports club, the church, etc.

In order to group the needs of the neighbors, the so-called neighborhood associations arise, whose purpose is always to ensure “the common good”. The social and emotional aspect of the inhabitants of a neighborhood or community are the basic pillars for the formation of the Neighborhood Councils since they ask the questions “who are we? What do we want from our neighborhood? ”, Fundamental questions when deciding on a development plan or project for the community.

Affective communication, in daily life, should be a basic foundation for building a friendlier neighborhood and, in this way, gradually forming a community and sowing the seeds for the formation of a Neighborhood Council. The basis of any Neighborhood Council must be the existence of real neighbors, from the social and affective level described above.

So why are the neighborhood councils becoming political headquarters?

In political science there is the concept of territorialization, which is the process of domination (political-economic) or of the appropriation (symbolic-cultural) of a space, made by a human group It is immaterial, but it becomes present when there is a recognition of belonging in the territory by a human being, that is, when this is identified with the territory.

Deterritorialization refers to the loss of territory, due to power struggles; where any relationship with the history and memory of places is broken, this is then what is happening with our neighborhood associations.

Painted their facades with their own colors, symbols and concepts that the left imposes, and without even hiding their political positions, certain neighborhood associations, for example some close to the so-called “Ground Zero” of the revolutionary outbreak, openly hold town councils occupying public spaces of the community (parks) and publicly defending the insurrection.

What does this have to do with the need and common good of the neighborhood?

The law that regulates the organization, purposes and attributions of the Neighborhood Councils is Law No. 19,418, in force since April 1, 2014. Varied and valuable functions of common good in neighborhoods, populations and localities.

They were developed throughout the 20th century as a collective and autonomous expression of the inhabitants to promote essential improvements for their well-being in relation to multiple habitat needs ”.

The Neighborhood Councils as a proper institution emerged as part of the "popular promotion" in the Government of Eduardo Frei Montalva, in 1968, where they are legally recognized.

The 1968 neighborhood council law is contextualized in the political agenda that advocated profound social changes, but in opposition to revolutionary movements. Within this project, a fundamental aspect was the so-called "popular promotion", which sought to integrate the population known as "marginal" by promoting their organization and thus integrating them into political life, concentrating demands and in some way controlling the revolutionary potential of large sectors of the population.

In the Popular Unity government, "popular promotion" was replaced by the National Council for Social Development and the "poblador" was considered a primary revolutionary subject.

Currently the role of the Neighborhood Councils is mainly related to issues related to housing, paving and basic services, environmental issues, green areas, public transportation, even the demands of certain groups such as children, youth, women and the elderly.

The law that regulates the organization, purposes and attributions of the Neighborhood Councils is Law N ° 19,418, in force since April 1, 2014. Article 3 of this law prohibits proselytizing actions, having to respect all the Political, religious preferences, etc., therefore these neighborhood associations that are carrying out this type of activity are clearly breaking the law.

Is it then that you want to do with the neighborhood councils what was done in the Popular Unity?

Last year, senators Carmen Gloria Aravena, Luz Ebensperger, Ricardo Lagos Weber, Carlos Montes and Ximena Rincón, presented a project that modifies law No. 19,418, in order to strengthen the role of neighborhood councils and other community organizations in representing the community and supporting the action of its leaders.

What does the motion propose that strengthens the role of neighborhood associations?

Improve the current organic regulation of the neighborhood councils and other community organizations, their functions and attributions, the forms and modalities of participation in the neighborhood, local and communal territories and the mechanisms of linkage and reciprocal responsibility

The project also includes respect for the autonomy of neighborhood councils, the right to information, education and training of leaders and neighbors. I wonder, will this include political training?

Today, days after the plebiscite, I see that my JJVV comes out as a convener of protests for the approval in my neighborhood, the president, clearly a political operator uses the headquarters of the neighborhood council that belongs to all of us as a meeting point and political organization

Chile and the communist maneuvers

Chile and the communist maneuvers. The decline of public education. A few days ago, the information went viral that the Instituto Nacional, the emblematic high school of our country, called some time ago as "the first light of the nation" and...

Bolsonaro talks about the armed forces in Argentina and social control

Bolsonaro talks about the armed forces in Argentina and social control. Jair Bolsonaro spoke about the curfew in Argentina: “The Army in the streets to keep the people at home”. In what promises to be a new diplomatic crossing, the Brazilian ...