COMMUNIQUÉ: THE HEMISPHERIC FRONT FOR LIBERTY IS FOUNDED 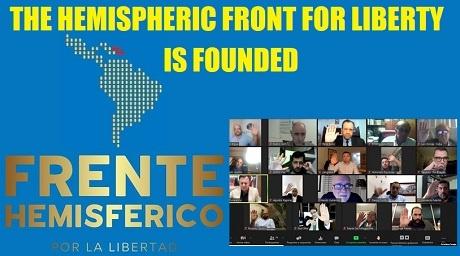 Miami, Florida. March 29, 2021 - Hemispheric Front for Liberty- Over 30 representatives of political parties and non-governmental organizations, as well as congressmen, former diplomats and academicians from several countries of Latin America, got together, through a virtual assembly, to found the Hemispheric Front for Liberty. As a result of the meeting, the participants announced, among other initiatives, a regional action in favor of the 47 democratic activists arrested in Hong Kong by the Chinese regime, and a solidarity action in favor of the opposition political leaders arrested by the new government of Bolivia. 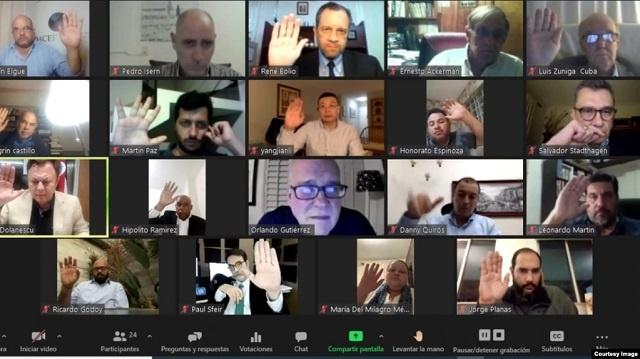 The foundational assembly, which was jointly presided by the Costa Rican Congressman, Dragos Dolanescu, and the President of the Mexican Commission of Human Rights and former Senator, Rene Bolio, had as a goal to build a coordination among anticommunist and pro-liberty and democracy forces of the region with a special emphasis in confronting “new mutations of the totalitarian virus.”

In the meeting also participated Dr. Yang Jianli, a prominent exiled and former political prisoner from China. The participation of Dr. Jianli arises from the concerns stated by the founders of the Hemispheric Front of “an increasing influence of Communist China in the region.”

The new institution set as a purpose creating “a strong alliance among activists, legislators, non-governmental organizations and democratic political parties of the region and the world, to educate and alert the people of Latin America who are at stake of losing their liberties and democracy.” The Hemispheric Front will also collaborate with the efforts of the people of the enslaved countries to liberate themselves from their communist oppressors.

The core of the new Institution is the real threat posed in the region by powerful political forces, among them the communist regimes of Cuba and Venezuela which, in alliance with Communist China, Russia and Iran, are carrying out an intense and clandestine work in several countries of Latin America to have communist political groups taking over governments.

Congressman Dragos Dolanescu was elected Secretary General of the Front and the Cuban exiled Dr. Orlando Gutierrez Boronat as Coordinator.

As evidence of the afore mentioned alliance were pointed out “Foro de Sao Paulo”, “Grupo de Puebla” and several other radical associations dedicated to coordinate destabilizing actions against democratically elected governments of the region.

The political stance of the Hemispheric Front for Liberty is based on “the historical experience demonstrating that communist regimes perpetuate their control of government, crush political diversity, subdue to their authority the legislative and judicial branches, confiscate or intervene private business, turn the whole population into a ‘mass of obedient people’ and punish severely those who dissent from their absolute ruling.” The traditional communist promise of “social justice”, particularly to those in dear need, never is fulfilled.