Bolsonaro talks about the armed forces in Argentina and social control 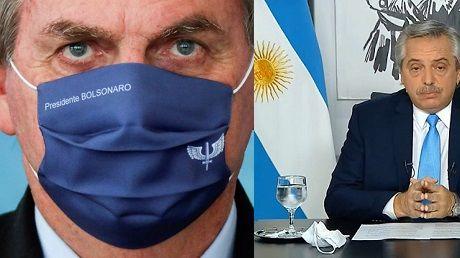 Bolsonaro talks about the armed forces in Argentina and social control. Jair Bolsonaro spoke about the curfew in Argentina: “The Army in the streets to keep the people at home”.

In what promises to be a new diplomatic crossing, the Brazilian president Jair Bolsonaro He referred to the surprising restrictive measures adopted by the Argentine government to control the coronavirus pandemic, among which the curfew and the total closure of face-to-face education stand out. The head of state of the South American giant issued a tweet in which highlighted not only the prohibition of driving but the presence of military forces in the streets of the City of Buenos Aires, as the Argentine announced last night Alberto Fernandez.

“The Argentine Army in the streets to keep the people at home. Curfew between 8 p.m. and 8 a.m. (sic). Good morning everyone”He tweeted Bolsonaro, with an image of Infobae in which the measure was highlighted. His next post referred to the task being carried out by the forces of his country, highlighting that “transport 320 kilograms of health material and vaccines against covid for the municipality of Boca do Acre, in the Amazon”.

Consulted on the declaration of Bolsonaro during a long interview on the Argentine radio station Radio 10, Fernandez He tried to clarify that the prohibition for the population to circulate for almost half the day could not be framed within a curfew. “It would be necessary to explain a little to Jair Bolsonaro how the Constitution works”Said the Argentine president, who after several days of convalescence after contracting coronavirus was discharged this Wednesday.

“In Argentina there is no curfew; In Argentina, the Armed Forces do not do internal security … I have a great appreciation for our Army, our Navy and our Air Force, which have collaborated in a magnificent way in the pandemic; now I have asked them to help me set up health posts so that we can increase testing and address any situation that needs to be addressed”, Said the president.

The announcement of the presence of the Army in the streets was made by Fernández at the same time that he reported on the control that federal forces will exercise so that no one circulates between 8 pm and 6 am as of this Friday. After the communication of the new presidential decree in which the measures were reported, various sectors of the Argentine capital and suburban areas protested against a new quarantine.

Fernandez decided to move forward with a tougher package of measures to try to face the advance of the second wave of coronavirus. After meeting with the Chief of Staff, Santiago Cafiero, and the Minister of Health, Carla Vizzotti, resolved to further restrict circulation, suspend face-to-face classes for two weeks and prohibit sports, cultural, social and recreational activities. Also the curfew between 20 and 6.

All new measures will be implemented only in the metropolitan area that includes the City of Buenos Aires and what is known as Greater Buenos Aires, the geographical setting where the second wave of coronavirus impacted the most. However, the President asked the mayors and governors to accompany him in “this difficult moment” and opened the way for them to adhere to the measures.

Faced with the increase in cases, the Government decided to suspend face-to-face education from Monday, April 19 to Friday, April 30. It will return to the virtual modality in the three educational levels. It was one of the activities in which the president tried not to give in. Except for the virtual classes, which will begin on Monday, all the measures announced by the President They will come into effect from Friday.

While, traffic restrictions will be between 20 and 6 in the morning. In the next 15 days Recreational, social, cultural, sports and religious activities in closed places are suspended. In addition, business activities will operate between 9 in the morning and until 19. The gastronomic activities will work with the home delivery mode after the allowed hours.

The Government considered that the greatest risk of transmission occurs in nighttime social and recreational activities, where there are no two meters of distance and there are crowds. That is why he decided to implement new, tougher and more focused measures. This Thursday, in addition, Fernández added to the shopping centers and announced a compensation of 15 thousand pesos for those people who already receive social benefits.

Alberto Fernández ordered a curfew from 20 to 6 in the metropolitan area of ​​Buenos Aires
Did you like it? Share your thoughts!
Tweet
Whatsapp
Source or Author Info

Infobae is the leading news portal in Argentina and the first to bet on social networks as a communication and exchange channel with its readers.
Prev Next