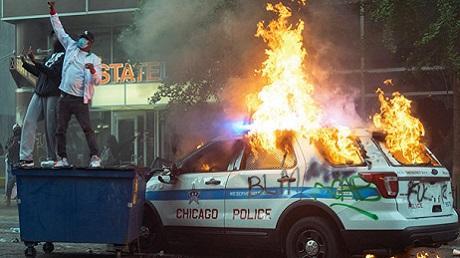 Radical-left plot to shut down the country and force President Donald Trump from power.

Leftists are plotting nationwide "disruption" if the coming November presidential election result is too close to call, according to reports.

An organization of radical-left activists has posted an online guide that outlines a plan to shut down America and force President Donald Trump from power.

A left-wing group called ShutDownDC is circulating the guide as a Google doc titled: "Stopping the Coup."

It casts its plan for disruption as a response to an imagined “coup” by the president in the case of a close election.

“Preventing Donald Trump from stealing the election and remaining in office is likely to take mass, sustained disruptive movements all over the country,” ShutDownDC declares in an email promoting the guide.

The guide is a manual to creating the proposed “disruption.”

Parts of the guide are committed to ensuring a “fair election,” according to Breitbart.

Parts of it, however, read like a manual for staging a coup rather than a guide to preventing one:

In the context of a coup or highly contested election we need to be clear that our actions must directly affect the structures and pillars of power.

Our largest asset in this regard utilizes the ideas of non-compliance through massive, broad based direct action.

Where we can, we need to be in the streets, on the highways, or at the sites of power and power holders.

In our jobs and lives we must refuse to allow those taking control the legitimacy of the power they seek through strikes, slowdowns, and boycotts, and public refusal to accept an illegitimate ruling party.

Another section urges activists to stop American life from continuing if the election does not go their way (original emphasis):

In order to really win we will need to force some pillars of power (business, military, media, or other major institutions) to decide to side with the people, or at least get out of the way.

If everyday life goes on, a despot will not leave power, and so there will be no incentive for real systems change.

You want to think about what it might take to stop business-as-usual.

The guide indicates that activists intend to “demand that no winner be announced until every vote is counted,” and that they will launch “mass coordinated action” to that end.

The signal for action will be if President Donald Trump is declared the winner on Election Night:

Trump may try to declare himself the victor before the votes are counted, or Fox News might call the race.

Those who can should be prepared to take action against those who are feeding into the stolen election narrative, including social media companies that are letting falsehoods or incitements to violence spread.

The guide imagines a number of bizarre nightmare scenarios — such as Attorney General William Barr trying “to seize all mail-in ballots and invalidate them” — and uses them to motivate readers and justify plans for “direct action.”

One section says that in the case of a contested election, “we must take action” (original emphasis):

In the end, the actual electorate might be split, half truly believing that Trump was elected legally, and half knowing that he was not.

It is in this muddied context of legal and political wrangling that we must take action.

We cannot wait to see how the chips fall.

That will only ensure more power for the violent white supremacist machine that is the Trump administration and its supporters.

We want to be clear here, though: we are not a group of Biden supporters.

This is not about ensuring that the Democrats win, but actually preparing for the possibility that white supremacist violence will continue.

The guide also suggests that activists will continue their “disruption” regardless of who wins the election: “We’re absolutely not saying the election is useless, but rather the reactivity of the right and the white supremecist [sic] will be present no matter who wins.”

The guide also links to a variety of other documents, such as one devoted to preparing for the threat of violence, and another that lists allied organizations.

All of the documents seem to benefit from professional-level skills in writing, layout, and design.

The document appears to be the product of a group called the Disruption Project, whose website describes itself as “dedicated to supporting uprisings, resistance and mass direct action.”

It suggests a revolution in the United States — “nonviolently”:

Our belief is that when mass numbers of people stand up and take action against the unjust systems of racial capitalism, the heteropatriarchy, white supremacy and settler colonialism, we have the ability to force ruptures and dismantle these systems.

In other countries we have seen uprisings nonviolently topple dictatorships and illegitimate governments.

ShutDownDC’s website indicates that it expects Trump to be “forced from office,” adding: “We are not seeking a ‘return to normalcy,’ because we know that returning to ‘normal’ means returning to a system that was built on oppression.

"Rather, we see this as the time to rise up against the current crisis and move forward to dismantle the interlocking systems of oppression that have plagued this land for centuries.”

The website is somewhat evasive on the topic of violent tactics.

However, it also says that it will not make “value judgments about the tactical approaches other people and organizations may choose to embrace.”