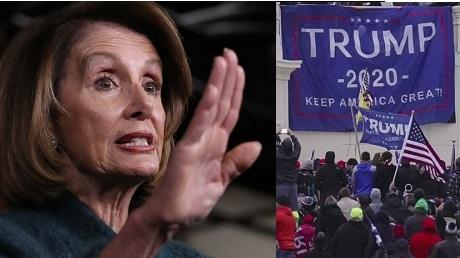 The Democrat’s so-called “national healing” efforts have backfired as they attempt to turn the protests on Capitol Hill into their latest red herring to attack white privilege.

This was on peak display over a video meeting Saturday in which Nancy Pelosi attempted to echo Republican lawmakers’ non-partisan condemnation of violence in D.C., but instead described the protest as a “racially charged” event. The career politician went on to claim demonstrators had failed to wake up to her version of democracy and instead used their so-called “white privilege” to storm the Capitol building.

“There are people in this country led by the President, for the moment, who chose their whiteness over democracy,” Pelosi stated. “That’s what this is about.”

Pelosi was not the first lawmaker to turn the tragedy into a political opportunity. In a public address last week, Joe Biden, who has worked as a lawmaker for over 40 years, claimed that institutions in America allow white people to get away with more than Black people.

“No one can tell me that if that had been a group of Black Lives Matter protesting yesterday, they wouldn’t have been treated very, very differently than the mob of thugs that stormed the Capitol,” Biden said. “Well, we all know that’s true, and it is unacceptable, totally unacceptable.”

No one can tell me that if it had been a group of Black Lives Matter protestors yesterday that they wouldn’t have been treated very differently than the mob that stormed the Capitol.

We all know that’s true — and it’s unacceptable.

Despite condemning Biden in the first Democrat debate over what she characterized as racist policies, Kamala Harris went on to mimic his claims and described the far-left Black Lives Matter protests as “peaceful.”

We have witnessed two systems of justice: one that let extremists storm the U.S. Capitol yesterday, and another that released tear gas on peaceful protestors last summer. It’s simply unacceptable.

These so-called “peaceful” Black Lives Matter protests inflicted $2 billion of damage in 2020, which made them the most costly riots in the history of our country.

After a rally in September, President Trump had warned about growing attempts of the radical left to use racially charged messages to infiltrate American institutions such as the government, media and education in an attempt to sow division in American society.

“We embrace the vision of Martin Luther King, where children are not judged by the color of their skin, but by the content of their character,” President Trump said. “The left is attempting to destroy that beautiful vision and divide Americans by race in the service of political power. By viewing every issue through the lens of race, they want to impose a new segregation, and we must not allow that to happen.”

Despite the left’s attempts to tie together conservatives, racists and vandals, many Republicans have pushed back, demanding the condemnation of the tragedy remain non-partisan, especially as the families of those that died still mourn.