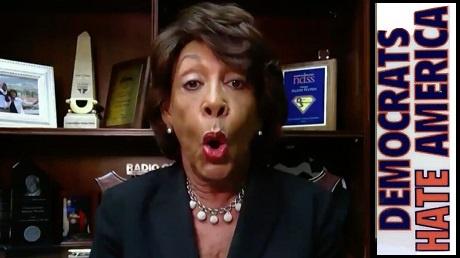 Leading the angry chorus of leftist voices trashing America was “Squad” member Cori Bush, a Black Lives Matter activist and raging firebrand who took to Twitter to put out the big lie that the 4th of July is racist and that it only represents “freedom” for white people.

When they say that the 4th of July is about American freedom, remember this: the freedom they’re referring to is for white people.

According to Rep. Bush; “When they say that the 4th of July is about American freedom, remember this: the freedom they’re referring to is for white people.” She added; “This land is stolen land and Black people still aren’t free.”

Bush was joined in her suggestion that only white people are free in America by Congresswoman Maxine Waters who continues to harp about slavery which was abolished in 1865.

July 4th... & so, the Declaration of Independence says all men are created equal. Equal to what? What men? Only white men? Isn't it something that they wrote this in 1776 when African Americans were enslaved? They weren't thinking about us then, but we're thinking about us now!

“July 4th… & so, the Declaration of Independence says all men are created equal. Equal to what? What men? Only white men? Isn’t it something that they wrote this in 1776 when African Americans were enslaved? They weren’t thinking about us then, but we’re thinking about us now!” She tweeted.

For good measure, Waters marked the holiday by attacking election integrity laws that have been passed in numerous Republican-controlled states since the 2020 election, throwing in the names of sanctified criminals George Floyd and Michael Brown for effect.

Like the rest of her party, the octogenarian Waters is steaming after the Supreme Court smacked down a DNC legal challenge of Arizona’s pro-democracy law that banned the practice of ballot harvesting, finding that there was no sign of discriminatory intent; a major blow to the Biden regime’s lawsuit against Georgia seeking to reverse its recent law has been dishonestly likened to Jim Crow.

Up and coming race-baiter Jamaal Bowman who represents New York’s 16th Congressional District also pushed the false narrative that the 4th Of July is only for white people.

Let us reflect on the full story of America today.

Despite a system stacked against us, we must continue to use our collective power to change that system. #4thofJuly https://t.co/msYg7TQaDt

One notable absentee from Twitter was Alexandria Ocasio-Cortez who took a rare break away from a social media sphere that she dominates, a hint that she may finally be developing some political savvy in not dumping on America on the cherished national holiday.

Going into the woods for a few days. Everyone be good and Happy 4th ✌🏽

Besides the silence of AOC, other normally reliable America haters including the other three charter members of the “Squad” also flew under the radar, a sign that Democrats who have enabled an epic crime wave are feeling increasingly nervous about their chances of retaining control of Congress in 2022 when an electorate that is sick and tired of seeing America’s good name dragged through the mud send a message at the polls.