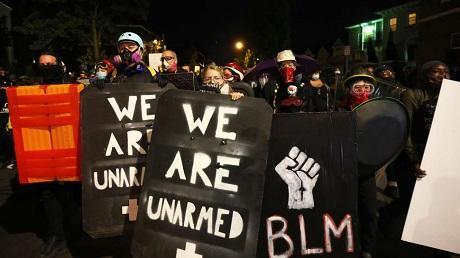 Similar tactics have popped up during protests and riots in places such as Portland, Ore., and Louisville, Ky. Protesters in Rochester were seen forming their own variation last week as organizers screamed for “white shields” to form a protective circle around black protesters. The strategy is designed so that the white people on the perimeter will receive the brunt of whatever police response comes, if one comes at all, based on the idea that because someone is white, they are less likely to be met with force by police.

“If you’re white and you got a shield, you need to be making a perimeter from whatever this street is to whatever that street is. If you are black, stay in the middle,” one woman with a megaphone shouts at assembled protesters in a video that surfaced online on Saturday.

In late May, during protests over the death of George Floyd, white people in Louisville formed a line between police and black activists. The Kentucky National Organization for Women hailed the action for its “love” and as an example of “what you do with your privilege.”

Protesters in Portland have used similar tactics numerous times, sometimes race-based as the march in Rochester was, as the city has undergone over 100 days of nightly demonstrations, many of which have turned violent.

Prude, a black man, died in March after being comatose for a week following an interaction with police. The Daily Wire reported on the interaction on Friday:

Back in March, at the height of the coronavirus pandemic, Daniel Prude, a black male, interacted with officers from the Rochester Police Department (RPD) in New York after at least two people called 911 about Prude’s behavior and welfare, included Prude’s own brother, Joe Prude.

Police reports indicate Prude was restrained by officers while waiting for the ambulance the cops summoned — video (below) suggests this was done soon after Prude told officers, “Give me your gun, I need it.”

As noted by Forbes, Prude “had been taken to the local hospital for suicidal thoughts about eight hours before his encounter with police on March 22.”

As cops were physically restraining the man for about two minutes, body camera footage (which can be viewed below) and media reports suggest the 41-year-old threw up and loss consciousness. He was reportedly resuscitated on the way to the hospital but likely suffered severe brain damage and was pulled from life support about a week later by his family.

Notably, Prude has a mesh-like hood placed over his head, dubbed a “spit hood.” The device is used to protect officers from saliva. Prude was repeatedly spitting and reportedly telling people he had COVID. (The interaction with police was in March, at the height of the novel coronavirus pandemic.)

Protesters in Rochester took to rioting, vandalism, and setting fires in over the weekend in Prude’s name. On Thursday, before much of the rioting and destruction took place, one man in Rochester demanded the resignation of the Rochester chief of police and other officers.

“We want badges, we want Chief of Police badges. We want it because they swept this under the rug,” a man told a reporter, alleging a coverup.

“Black lives do matter, okay? We want to see those officers arrested, and if we don’t — we tired. We are tired. We tired of it, man,” he continued. “They act like black people — we want justice all over the world, we want equal pay, we want equal rights, when you go to court, we wanna be treated equal.”

Author: Tim Pearce is a breaking news reporter for The Daily Wire. He previously covered breaking news at The Washington Examiner and politics and energy at The Daily Caller News Foundation. He is a graduate of Hillsdale College.
Read full article on DAILY WIRE