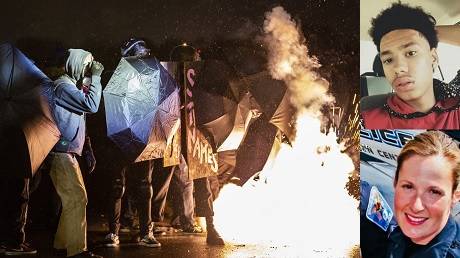 Officer Kim Potter, part of the Brooklyn Center Police negotiation team in Brooklyn Center, Minn. Potter, who fatally shot Daunte Wright during a traffic stop on Sunday, April 11, 2021 in the Minneapolis suburb and the city’s chief of police have resigned. (Bruce Bisping/Star Tribune via AP)

On Tuesday, more than 1,000 protesters gathered outside the city’s police station, which is now guarded with concrete barriers and a large metal fence. Police declared the protest an “unlawful assembly” and ordered the crowds to disperse.

During a press briefing later that day, Minnesota State Patrol Col. Matt Langer said more than 60 protestors were arrested for inciting riots and “other criminal behavior.” He stressed law enforcement will not tolerate these types of violent and dangerous demonstrations.

“I would just like to reiterate what other people have said and I’ll say it again, the behaviors that we continue to see are unacceptable and we are not going to tolerate them,” Langer stated.

Chaotic scene tonight outside the Brooklyn Center Police Department where it seems the police and military greatly out number protesters. They are shooting from tanks. pic.twitter.com/F14j0Tj9Gc

“Make no mistake about it, we are prepared and we will be back tomorrow,” the police official continued. “And we are not going to tolerate the activities that we’ve seen the past couple of nights in the future either.”

Brooklyn Center’s police chief and the officer who accidentally shot Wright, Kim Potter, both resigned from their positions. The city’s mayor, Mike Elliot, said he hopes the resignations would bring some peace to the community. He added that he will continue to work toward “full accountability under the law.”

“I’m hoping how this will help bring some calm to the community,” Elliot stated. “I think ultimately they want justice, they want full accountability of the law and that’s what we are going to continue to work.”

Since then, Porter has been arrested and taken into custody on second-degree manslaughter charges. Prosecutors officially announced the criminal charge Wednesday. The 26-year veteran intended to taser Wright during a traffic stop, but mistakenly gabbed her firearm instead. She fired a single shot.

Wright was pulled over due to a traffic violation and police tried to detain him after discovering he had an outstanding warrant.

A curfew was in effect for Brooklyn Center and several surrounding cities from Tuesday 10 p.m. until 6 a.m. Wednesday morning. The National Guard also deployed troops in the region as a precaution against further unrest.