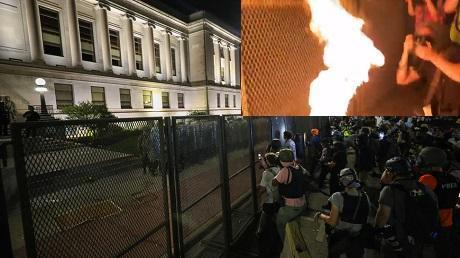 On Tuesday night, as rioters converged on the Kenosha County Courthouse in Kenosha, Wisconsin, protesters were caught on video screaming extremist statements and burning an American flag.

In one incident from the demonstration caught on video and circulated online, one protester holding a small American flag screamed “Kill the f***ing police!” A second video showed a flag being set on fire as a protester shouted, “Death to America!”

An American flag was just burned outside the Kenosha County Courthouse. One woman screams, “Death to America!” and kicks the fence. pic.twitter.com/vI8U6EOGBv

Chants of “Death to America” have been, until recently, more associated with America-haters abroad than in the United States. The first leader of the Islamic Republic of Iran, Ayatollah Khomeini, who took power in 1979, championed the term being used. In 2015, Iranian President Hassan Rouhani defended the chant. In March 2015, Iranian Supreme Leader Ali Khamenei smiled and said, “Of course yes, death to America.”

On occasion, mainstream media will minimize the importance of the chant. CNN’s Erin Burnett, commenting on the Iranian parliament chanting “Death to America” after the killing of Iranian terrorist mastermind General Qassam Soleimani, stated, “I will say, I was in Tehran when they were chanting ‘Death to America’ once; I was at a rally and the people couldn’t have been more friendly to me personally as an American. It sort of felt like that. It felt like a thing and a trope as opposed to anything that was seriously meant and considered.”

In early July, at a rally in Washington, D.C., led by pro-Palestinian activists at which one of the organizers claimed that the Palestinian movement was “intrinsically tied to Black Lives Matter,” chants of “Death to America” were shouted by the crowd.

The riots in Kenosha followed the shooting of Jacob Blake by the police during an arrest. On Tuesday, his mother, Julia Jackson, spoke out against the riots, telling CNN’s Don Lemon, “My family and I are very hurt, and quite frankly disgusted. And as his mother, please don’t burn up property and cause havoc and tear your own homes down in my son’s name. You shouldn’t do it. People shouldn’t do it anyway, but to use my child or any other mother or father’s child, our tragedy, to react in that manner is just not acceptable. And it’s not helping Jacob. It’s not helping Jacob or any other of the men or women who has suffered in these areas.”

“For our President Trump, first I want to say a family member — and I don’t know if it was heard or not — said something that was not kind,” she later continued. “She is hurting and I do apologize for that. Our outburst does not reflect our behavior. And also, for President Trump, I’m sorry I missed your call because had I not missed your call, maybe the comments that you made would have been different. And I’m not mad at you at all. I have the utmost respect for you as the leader of our country. Like I said before, and I’m not saying this to him directly, we should always get the details from the right source before we start throwing bricks.”