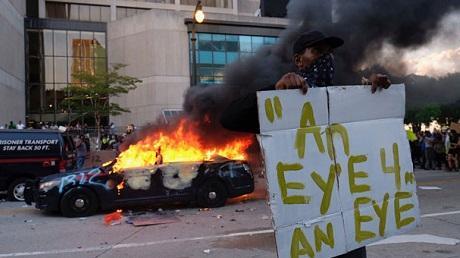 BLM embracing more terror tactics. BLM Warns America: 'We're Telling You What Will Happen, With Your Permission or NOT'.

A Black Lives Matter speaker at a Chicago rally has warned the American public that the far-left organization's demands will be met, "with your permission or not."

A BLM activist issued the threat late this week, warning that "we're telling you what will happen."

The Black Lives Matter speaker, who identified herself as Taylor Norwood, added that they will be repercussions for those who refuse to comply with their radical-left "demands."

During a different part of the press conference, Norwood repeatedly slammed Chicago's Democrat Mayor Lori Lightfoot for allegedly “not protecting the black women in this city.”

She also claimed that Lightfoot was robbing them “of their right to vote.”

“This is our city, our city, and we’re taking that s**t back,” Norwood blasted.

“We have demands, and they need to be met, and I feel like I’ve been saying this too much—we’re not asking you anything.

"We’re telling you what’s about to happen, with your permission or not.”

"You can listen to us or you can get ran over,” Norwood said as she ended her rant.

.#BlackLivesMatter activist in Chicago: “We have demands and they need to be met … we’re not asking you anything. We’re telling you what’s about to happen with your permission or not. … You can listen to us or you can get ran over.” pic.twitter.com/yEXFT4LOv9

At the same event, another Black Lives Matter speaker screamed at the media and society in general for being concerned about looting and riots.

"People are worried about looting, and there are literal lives being taken away?” she yelled.

“There are people who are dying, and y’all are mad about people looting Mag Mile?

"Get over it! These buildings are insured.”

"Materials will come back, but we will not come back if they kill us!” she continued.

"What do y’all not get about that? Gucci, Apple store, whatever it is—that stuff will be replaced, but we won’t be replaced.

Aggressive rhetoric and threats have become a common theme among Black Lives Matter and radical-left activists.

Khogali, a Toronto Black Lives Matter chapter co-founder, argues that "white skin is sub-humxn" and says she prays to Allah for the "strength" not to "kill" or harm "white folks."

In social media posts, Khogali mulled over how the white race could be "wiped out" by black people.

DOJ being pressured to investigate BLM terrorist funding. Republicans Join Calls to Investigate Funding Behind Black Lives Matter Riots. Justice Department called on to find out who is paying for violent leftist rioting. Republicans are calling on...