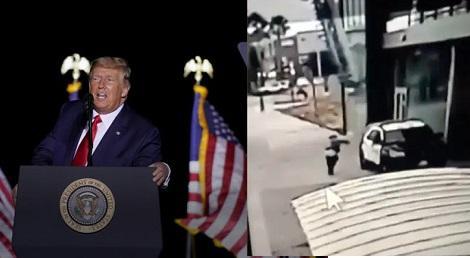 On Saturday two Department deputies of the Los Angeles Sheriff’s Department were ambushed in Compton at the Blue Line station.

Each one was shot in the head, according to reports.

Both officers were shot repeatedly and left for dead as they sat in their vehicle.

Trump condemned the horrific crimes during his rally campaign rally in Henderson, Nevada, on Sunday night.

“As we begin tonight, our thoughts are with the two sheriff’s deputies in Los Angeles who are fighting for their lives when a vicious criminal walked up to their vehicle and shot them at point-blank range,” Trump said.

“We send our love and our support to their families, and we pray to God for their recovery,” Trump added.

The President also noted Biden's failure to condemn violence against police officers, including the Las Vegas officer who was shot in the head in June and left paralyzed.

“For the entire summer Joe Biden was silent as left-wing mobs assaulted police officers,” he said.

President @realDonaldTrump: If you murder a police officer, you should receive the death penalty pic.twitter.com/8Kzg38WJ37

Trump blasted Biden for his silence during the Democratic National Convention, before he suddenly began condemning the violence when his polls plummeted.

“In the Republican Party, we know that police officers are not villains but heroes that risk their lives to keep us safe,” he said.

Trump also promoted the idea of the death penalty against people who kill police officers.

“And we also believe that if you murder a police officer, you should receive the death penalty.”

Trump also reminded those at his rally that the former Vice President wanted to eliminate the death penalty.

"He opposes the death penalty for the Boston bomber,” he said.