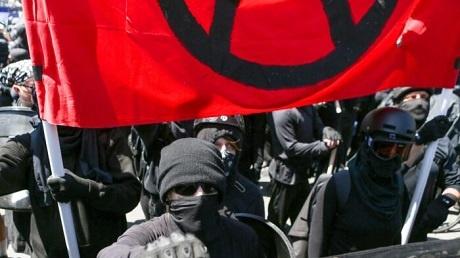 Black Lives Matter protesters and Antifa agitators marched through Washington on Feb. 6 and threatened people as they ate dinner, according to video footage and reports.

“Burn it down,” the demonstrators chanted.

Other video footage uploaded by independent journalists on the scene showed Antifa types fighting with police officers, who were trying to keep them away from restaurants. Some, clad in all black, could be seen holding the red-and-black Antifa flag.

At one point, police in Washington were seen forming lines around outdoor diners to separate them from the demonstrators and agitators.

Anti-police protests and riots have been a constant presence in Washington following the death of George Floyd in Minneapolis last May.

About 26,000 National Guard members were sent to Washington to provide enhanced security for the presidential inauguration on Jan. 20. Officials later said that about 5,000 Guard members would stay in the city until mid-March.

Police officials didn’t immediately respond to The Epoch Times about whether any arrests made.

Andy Ngo, an independent journalist who has chronicled Antifa’s actions across the United States, told The Epoch Times last week that the notion that Antifa is merely an ideology is false. Ngo said the group is “more than an idea. It’s also a movement.”

It has networks, and some of them are organized into formal organizations, he said.

Some have noted that the continuation of Black Lives Matter protests and Antifa riots is a signal that there’s a growing schism within the American left. Seattle, Portland, Oregon, and other cities have occasionally seen violent demonstrations since the Jan. 20 inauguration of President Joe Biden.

Also in January, demonstrators swarmed and attacked an Immigration and Customs Enforcement facility—a frequent target in Portland during the Trump administration—which triggered a federal response.