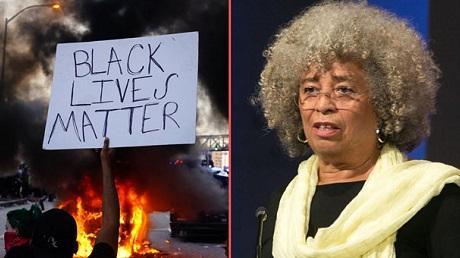 Davis made the remarks while speaking with filmmaker Ava DuVernay during an interview with Vanity Fair.

Longtime communist Davis warns that the violent BLM and Antifa demonstrations, currently ravaging cities across America, are simply the early stages of a larger radical-left “revolution.”

She claims the unrest is needed to bring about lasting radical social and economic change.

"Sometimes we assume the most important work is the dramatic work—the street demonstrations,” Davis told DuVernay in the wide-ranging interview.

"I like the term that [Marxist cultural critic] John Berger used: Demonstrations are ‘rehearsals for revolution'."

Davis was a longtime member of the Communist Party USA, according to Breitbart.

She also expressed sympathy for rioters who are tearing down historic statues:

“Those statues are our reminders that the history of the United States of America is a history of racism.

"So it’s natural that people would try to bring down those symbols.”

In their Vanity Fair conversation, Davis told DuVernay that the Black Lives Matter riots and “defund the police” movement represent the culmination of decades of radical left-wing activism.

"The protests offered people an opportunity to join in this collective demand to bring about deep change, radical change,” Davis said.

"Defund the police, abolish policing as we know it now.

"These are the same arguments that we’ve been making for such a long time about the prison system and the whole criminal justice system.

"It was as if all of these decades of work by so many people, who received no credit at all, came to fruition.”

"Capitalism has always been racial capitalism,” she told DuVernay.

"Wherever we see capitalism, we see the influence and the exploitation of racism.”

She also pushed for free healthcare and childcare as a way of redressing racism.

"All of these issues are coming to a head.

"This is, as you said, a racial reckoning.

"A reexamination of the role that racism has played in the creation of the United States of America.”

Last time I interviewed this icon was for @13THFilm. I love learning from her. I encounter unexpected treasure whenever we speak. She effortlessly drops more knowledge than most have ever picked up. Her laugh is soft and musical and lovely.

Thanks to my editor, Ta-Nehisi Coates. https://t.co/NnMytogv1Z

Ava DuVernay acknowledged in a tweet that the editor of her interview with Davis was Ta-Nehisi Coates.

Coates is the author and journalist whose 2014 Atlantic article “The Case for Reparations” reignited the push for slavery reparations.