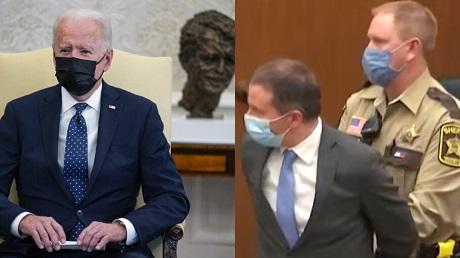 “I know George, I’m just going to answer that one question on George and his death. I have come to know George’s family,” Biden stated. “I’m praying the verdict is the right verdict. It’s, it’s overwhelming in my view.”

Speaking with reporters at the White House on Tuesday, Biden endorsed the family of George Floyd and appeared to firmly align with their agenda.

“It’s time for Democrats to speak out when they see it on both sides. They only want to speak out on one side of the aisle, not on both. That hypocrisy, I think, is starting to shine through,” Rep. Steve Scalise (R-La.) said. “It’s a powder keg down there. The last thing you want to do is make it worse and especially to give grounds for an appeal.”

President Biden spoke with the family of George Floyd yesterday to check in with them and also share that the family was in his prayers.

In the meantime, the White House continues to play damage control, as press secretary Jen Psaki claimed Biden “certainly is not looking to influence the verdict.”