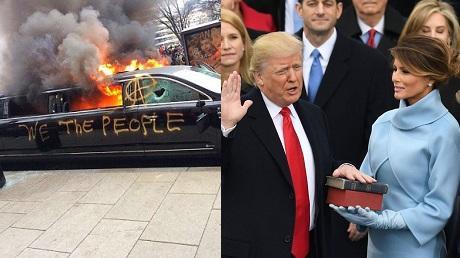 Antifa Rioters in Trump Inauguration Had Charges Dropped. The liberal media doesn’t want you to remember this story.

They want you to believe that the only violent protest in the history of Washington, DC was the one that just took place at the Capitol on January 6, 2021.

On the morning of President Trump’s inauguration on January 20, 2017, hundreds of radical left-wing Antifa terrorists ascended upon Washington, DC to violently protest against the duly elected President, Donald Trump.

This angry mob of black-dressed Antifa thugs smashed storefronts and bus stops, smashed windows of store owners, and even set a black limousine on fire.

Warning: The footage below is incredibly violent and disturbing.

More than 200 of these dangerous and violent far-left rioters were arrested on felony rioting charges in Washington, DC.

Here’s the most upsetting part of this story…

18-months later in July 2018, the government dropped ALL charges against every single of the Antifa rioters who were arrested.

Left-wing activists celebrated the news that all the charges were dropped.

“This is huge news,” said Dylan Petrohilos, a Washington-based activist who was one of the original defendants but had his charges dropped earlier this year. “The solidarity we showed as defendants won out.”

Activists credited a unified defense strategy with prevailing. This strategy included persuading defendants, sometimes over the objections of their lawyers, not to accept plea bargains.

“Solidarity was what won the case,” said Sam Menefee-Libey, a member of the DC Legal Posse activist collective. “I hope that organizers and people on the left study it.”

Author: The Scoop is a news company that makes short, easy to understand videos about the top conservative news stories of the day. We were founded in 2017 by Steeve Strange, CEO, and Cameron Schnittger, Content Strategy Director. Our mission is to give conservative Americans a voice on the far-left social media platforms. We only report on real news; we will never spin a story to push an untrue agenda. Check out our website www.thescoop.us for more articles and videos.