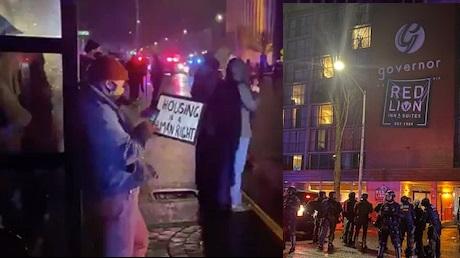 Antifa Invade and Occupy Hotel in WA. They threatened lives of hotel personnel with knifes, batons, hatchets and other weapons from far-left group, Oly Housing.

A community in Washington is in disarray after far-left activists invaded a hotel with weapons while claiming to provide beds for people experiencing homelessness.

According to the Olympia Police Department, a homeless activist group forcibly occupied the downtown Red Lion Hotel on Sunday. They threatened the lives of hotel personnel with knifes, batons, hatchets and other weapons. The far-left group, identified as Oly Housing Now, is known for being affiliated with Antifa.

Court documents reveal 17 rooms had been already been reserved by the group the night before with hotel employees reporting that they were told the rooms were originally for a wedding party. At the time of the incident, 40 rooms in the hotel were booked with guests unaffiliated with the protest.

The activists allegedly wanted to use the hotel in order to place pressure on the city and demand local lawmakers to find housing for the homeless.

Protesters confront police in Olympia, Wash. after they arrest the #antifa who sieged a Red Lion hotel. Police are making arrests. Video by @jasonrantz: pic.twitter.com/MYmsE2bKAa

Should be international news:

An #antifa group sieged a Red Lion hotel in Olympia, WA, forcing staff to flee for their lives & guests in 40 rooms had to shelter in place. The antifa brought hatchets, knives & other weapons to the siege. City statement: https://t.co/dBAYoxqTEP pic.twitter.com/5s0LTo5BU8

When law enforcement arrived, roughly 45 members belonging to the far-left group were surrounding the hotel property. Employees and guests were escorted out safely by police who were able to gain control of the situation quickly.

At least 10 people have been arrested with individuals facing various charges, including burglary and assault. Authorities said the investigation is ongoing as they actively work with state officials.