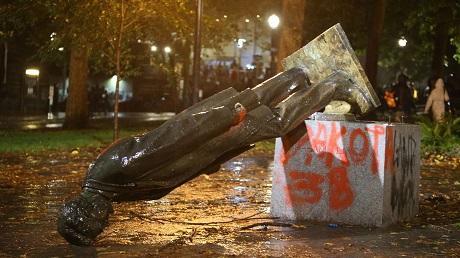 On Sunday night, rioters in Portland, Ore., toppled statues of Abraham Lincoln and Teddy Roosevelt and caused thousands of dollars’ worth of damage at the Oregon Historical Society. Declaring a day of action, the “indigenous wing” of antifa threatened violence to anyone caught live-streaming or recording video of their actions leading into Columbus Day.

Statue being pulled down a bit ago, posted by this account, which seems to be Tracy Molina. https://t.co/h6xrGqOOtk #Portland pic.twitter.com/Z4vPsGdnht

Well I guess they're just fucking shit up in Portland. pic.twitter.com/I2P6uMPzdj

The statues, once toppled, were covered in what appears to be orange paint.

After toppling the statues, rioters smashed windows at the Oregon Historical Society, an expansive museum on the South Park Blocks near Portland State University.

Portland Protesters have vandalized a museum in Portland. pic.twitter.com/vOae8yICeX

One person attempted to set the building on fire by throwing a lit flare into the lobby.

The east side of the Oregon Historical Society building faces SW Broadway Street, a heavily traveled thoroughfare through downtown Portland. That side of the building has a large, multistory mural depicting events from Oregon’s history. Rioters defaced the mural by pelting it with paintball guns.

The rioters claimed moral righteousness in destroying as much American history as they could get their hands on.

Rioters then moved on to cause serious damage to several businesses in downtown Portland.

President Lincoln has been toppled, as has Teddy Roosevelt.

The Oregon Historical Society was vandalized as well. They have been showcasing the 19th amendment, giving women the right to vote.

The riots and graffiti have featured radical indigenous messages for many months, claiming that Portland sits on land stolen long ago from native tribes. The rioters have used these claims as justification to destroy as much property as possible, with the ultimate goal of driving European settlers out of the Pacific Northwest. Of course, that sets Portland up for virtually endless riots, especially if laws continue to go unenforced and the district attorney continues to insist upon not prosecuting riot crimes. 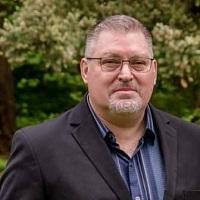 Author: Jeff Reynolds is the author of the book, “Behind the Curtain: Inside the Network of Progressive Billionaires and Their Campaign to Undermine Democracy,” available at www.WhoOwnsTheDems.com. Jeff hosts a podcast at anchor.fm/BehindTheCurtain. You can follow him on Twitter @ChargerJeff, and on Parler at @RealJeffReynolds.

Left appears to be preparing for civil war

Left appears to be preparing for civil war. The Left Preps for Civil War: 'The Potential for Violent Conflict Is High'. When you think about it, the American Civil War didn’t have to happen. President Lincoln had no intention whatsoever of interfe...