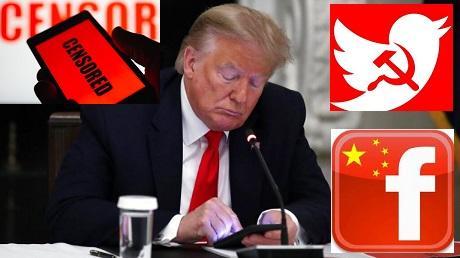 Supporters and non-supporters of President Trump are speaking out against Big Tech’s far-reaching ability to censor people.

“Facebook, Twitter, they all took down the President’s accounts,” Mike Lindell, CEO of MyPillow said. “They took down Sydney Powell’s. They took down General Flynn’s, all my friends are out there. So many that are in the media, they took down theirs. They took them all. We had all social platforms so they’re not going to be able to get these messages out there, and it’s their livelihood. This is the danger we’re in right now.”

A lawyer for the ACLU condemned social media companies, namely Facebook and Twitter, for the move, saying it’s concerning that these companies wield the unchecked power to remove people from their platforms that have become indispensable for the speech of billions.

Former Fox News host Megyn Kelly, who’s been an outspoken critic of the President, questioned the move. She claimed it targets people on the right or those who are not woke.

If you’re on the right or not woke or want to raise Q’s about the integrity of our electoral system, you’re next. https://t.co/3X5ZETw44P

In a series of tweets, Russian opposition leader Alexey Navalny called Twitter’s decision “unacceptable.” He believes officials based the decision off of emotion and political preference.

1. I think that the ban of Donald Trump on Twitter is an unacceptable act of censorship (THREAD)

Navalny blasted the social media company for letting unknown people ban accounts by a process the public is unaware of.

“Don’t tell me he was banned for violating Twitter rules,” Navalny said. “I get death threats here every day for many years and Twitter doesn’t ban anyone.”

The Russian opposition leader, who was poisoned late last year, is calling for Twitter to create a committee that can make such decisions.

10. This precedent will be exploited by the enemies of freedom of speech around the world. In Russia as well. Every time when they need to silence someone, they will say: 'this is just common practice, even Trump got blocked on Twitter'.