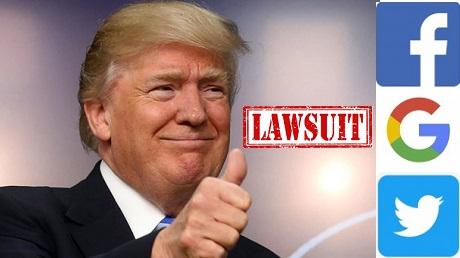 The 45th POTUS has been teasing plans for a new social media platform since he was banned by the major tech companies.

Trump was falsely accused of inciting violence through his questioning of the election results.

Facebook has said they will reconsider their ban on Trump after the midterm elections are out of the way.

However, Twitter has already said he will be banned for life.

A second source told Newsmax that Trump plans to address and confront the social media companies that banned him from their platforms.

Trump had previously promoted a personal message board in May in order to reach his millions of supporters but that website was eventually dismantled after social media platforms banned people from linking to it.

However, Trump told the media that he was planning his own app.

Gettr was briefly hacked within hours of being launched when someone was able to change screen names of famous accounts and post pro-Palestinian messages.

In March a source from the Trump team told Fox News that they were taking their time on the new social media platform because they'd only get one chance to get it right.

In an interview in February, Trump told Newsmax that Twitter had become very boring and that he wouldn't return to it even if they lifted their permanent lifetime ban.