Statue of Jesus Beheaded in Miami

Statue of Jesus Beheaded in Miami 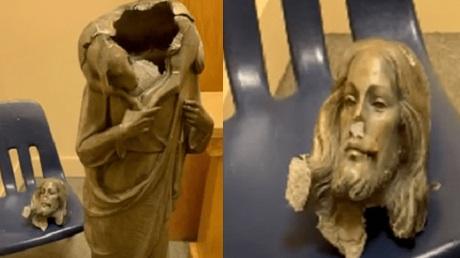 A statue of Jesus Christ was found toppled and beheaded at a Catholic church in Miami, an act of vandalism that probably will be investigated as a hate crime, church officials said.

The attack that occurred sometime between late on July 14 and the morning of July 15 at Miami-Dade’s Good Shepherd Catholic Church was likely targeted, Rev. Edivaldo da Silva said. The statue was decapitated and removed from its pedestal, he said.

“They had some powerful hands to remove it. Seeing what is happening in our country, I presume so, but we don’t have 100 percent assurance,” da Silva told local news station WSVN.

The local archdiocese said that police will likely investigate the statue desecration as a hate crime.

“This crime reflects the increasing attacks on the Catholic church across the country,” the archdiocese said in a statement, referring to a series of arson attempts on churches in recent days in the midst of nationwide unrest.

Good Shepherd, the church, said in a statement to Fox News: “We totally condemn this action. We invite our community to pray for peace.”