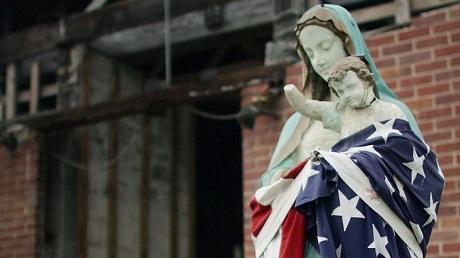 Republican Tennessee Congressman Chuck Fleischmann addressed the beheading of a Virgin Mary statue in Chattanooga as being “among a series” of attacks on Catholic Churches that have taken place across the country.

The statue was reportedly found knocked over and beheaded at St. Stephen Catholic Church on July 11, the third incident of a vandalized Virgin Mary in the same week. Rep. Fleischmann told the Daily Caller that he’s praying for the perpetrators of the attack, and hopes justice is served.

“During these difficult times as a nation it is imperative that we come together. It is heartbreaking to see so many incidents of hate directed at religion and the church in recent days,” he told the Caller.

“I, like so many Americans, find strength and hope in faith and I know the power it has to help in healing. While I hope justice will be served, I pray for the perpetrators of these heinous acts and I pray for our nation to heal.”

This is a disturbing attack on Catholicism and religion.

Sadly, it is among a series of attacks on Catholic churches that have happened in recent days.

I hope that the perpetrators will be brought to justice, but I also pray that they will find their way to God as well. https://t.co/MFPHZhqn3h

Fleischmann responded to a tweet Wednesday from Bishop Richard Stika of Knoxville, where he refers to the multiple other attacks on Catholic Churches that have taken place recently in the country.

There was no local controversy around the church in Chattanooga, and no known motivation for the attack, Jim Wogan, director of communications for the Diocese of Knoxville told Catholic News Agency. The lack of an explanation “can be almost more troubling than knowing, sometimes,” he said.

Two other statues of the Virgin Mary were similarly vandalized in different states with seemingly little light shed on motivation, all in the same weekend. In Boston, police are investigating an arson at a parish where a statue of the Virgin Mary was set on fire Saturday.

The day before, July 10, an individual was recorded on surveillance footage vandalizing a Virgin Mary statue in front of a Catholic school and seminary in Queens, spray painting “idol” in black.

Property vandalism has escalated beyond defacing statues, however. In June, a man was arrested after allegedly vandalizing graves and a cross at a Catholic cemetery at Providence College. In July, the nearly 250-year-old San Gabriel Mission in California was under investigation after a fire destroyed its rooftop and interior. (RELATED: US Catholics Targeted In Several Separate Incidents Ranging From Vandalism To Attempted Murder)

The same weekend, a man was arrested July 11 after crashing his vehicle into the front doors of Queen of Peace Catholic Sanctuary in Florida, and lighting the lobby on fire while parishioners prepared for mass inside.

Marlo Safi is a 2018 graduate of the University of Pittsburgh. When she is not reporting on subjects like religion and culture, she is cooking or writing about cooking.