Hillary claims Christianity is "alienating" and BLM is "theological" 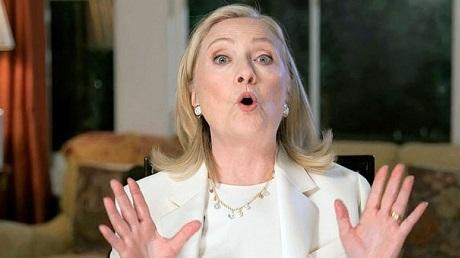 Twice-failed Democratic presidential candidate Hillary Clinton has claimed that young people are turning away from Christianity because it is too "judgmental" and "alienating.”

“A lot of young people are leaving the Church, in part because the way they understand what Christianity has become … so judgmental, so alienating that they think to themselves, ‘Well, I don’t need that,'” Clinton, who is Methodist, explained on her podcast, “You and Me Both.”

Clinton's guest, the far-left activist preacher William Barber, said in response that churches need to do a better job of explaining the transformative nature of Christianity.

Younger people “are very open to faith that is about transformation, about love, about justice, about equality, about the essence — the essence of what it means to be people of faith,” said Barber, who heads Greenleaf Christian Church in Goldsboro, North Carolina.

Earlier in their discussion, Clinton and Barber talked about the Black Lives Matter movement.

Hillary insisted that Christians should "take a hard look" at themselves and "figure out" how to become "a real partner" in the radical-left's "moral awakening."

The 2016 presidential candidate insisted that the Black Lives Matter brand name is a “theological statement” because “Jesus and justice are the same thing.”

Clinton went on to accuse Republicans of trying to co-opt Christianity.

“When you think about the very deliberate, concerted effort by one political party to basically try to own Christianity, and it overlooks the role of the African-American church, it overlooks, as you say, a lot of theology, a lot of history,” she said.

“It also overlooks this moment in time. ‘Black Lives Matter,’ I view as, you know, very profoundly a theological statement.”

Barber explained that the U.S. once had a theology of “slaveholder religion” but has also espoused the “religion of the abolitionist,” which he linked to today’s Black Lives Matter movement.

He argued the protests across the country now are “birth pains” of what he described as a “third reconstruction.”

"And I think America needs a third reconstruction.

"I think this is the birth pains of it.”

The preacher said Americans are in a place in which we can “come to terms not just with systemic racism as it affects black people, but systemic racism in all of its manifestations against brown people, against First Nations people, but also systemic poverty and ecological devastation and the war, economy and the false moral narrative of religious nationalism.”

He also urged people to run further to the left, echoing Rep. Alexandria Ocasio-Cortez’s (D-N.Y.) comments last month, when she said it’s not acceptable to be politically moderate.

“It’s going to require people that may run for office to be moderate, to recognize we’re not in a moderate moment, we’re in a reconstruction moment,” he said.

“We’re in an FDR moment.

"We are not in normal times.

"And God help us if we blow this moment.