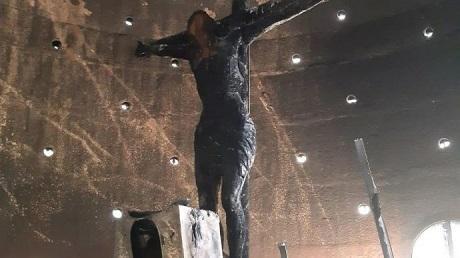 What was left of the image called the Blood of Christ, sculpted 380 years ago and venerated by Catholics in Nicaragua. It was placed in the chapel of the Cathedral of Managua, and was attacked with a Molotov cocktail July 31, 2020. (Credit: Twitter Father Edwin Roman.)

ROSARIO, Argentina – Against the backdrop of deep tensions between Nicaragua’s bishops and the socialist government of President Daniel Ortega and his wife, Vice President Rosario Murillo, three Catholic churches in the country have been attacked in the last three weeks, building upon a long-standing pattern of churches being targets.

While government officials have described the incidents as isolated and blamed conditions inside churches for any damage caused, Catholic leaders insist the attacks were “premeditated” and part of a campaign of “terrorism” directed by pro-Ortega forces.

In the most recent incident, a man shouting “I come to the Blood of Christ” threw a Molotov cocktail at an almost 400-year-old wooden crucifix displayed in a chapel of the Cathedral of Managua, the capital of Nicaragua.

Just two hours later, Murillo said the image had burned due to several votive candles nearby lit by the faithful, not because the assailant was targeting it. Some witnesses challenged that statement, claiming they saw a yet-unidentified man throwing the home-made explosive directly at the crucifix.

The Archdiocese of Managua, led by Cardinal Leopoldo Brenes, released a statement calling the assault an “act of sacrilege and profanation.”

Speaking with local news outlets, after spending time with those who were praying in the cathedral when the hooded man came in, Brenes said the suspect spent 20 minutes within the church and knew the best place to make his escape.

“I want to say this clearly: It was a terrorist attack, an act to try to shy the Church from its evangelizing mission,” Brenes said, adding that it had been “calmly premeditated” and “planned.”

Since a civil uprising against the government of Ortega in April 2018, there have been several attacks against Catholic bishops, churches and charitable offices. Bishops and many priests have been critical of the government, and they have opened houses of prayer for protesters to find refuge during the worst of the confrontations with the police and the military.

Hundreds were killed during the uprisings, and thousands of bullets were shot at various churches.

Father Edwin Roman claimed on Twitter July 25 that two parishes in Masaya, just to the south of Managua, had been attacked, with images and pews being broken and consecrated Eucharistic hosts and liturgical elements of value, such as a chalice, being stolen.

Roman was in the news in Nov. 2019 when his own parish was besieged for weeks, with a group of 11 hunger strikers forced to hold up inside. Authorities cut the power and water to the parish, and authorities arrested a group of 13 women for trying to bring water to those inside. The strikers had been locked in the church after they’d gone inside for a Mass to honor hundreds of political prisoners, many of whom remain in jail with no access to trial.

“Obviously, it’s no coincidence” Roman tweeted after Friday’s attack. “They are directed attacks, staggered against the Catholic people of Nicaragua, through their signs and images; especially to the most sensitive one as is the Eucharist. Blood of Christ … Save us!”

The burning of the image of the Blood of Christ, carved 380 years ago, is the last of several attacks the cathedral of Managua has faced in the past two years. In Nov. 2019, pro-Ortega sympathizers came into the church and temporarily took possession of it to stop the mothers of political prisoners to pray there. Women were kidnapped and the vicar of the cathedral, Father Rodolfo Lopez, was beaten.

In March 2020, also pro-Ortega mobs attempted to boycott a funeral Mass for poet and theologian Ernesto Cardenal, who supported Ortega back in the 1980s, but who’d been very critical of the current administration.

“They attack the image of Christ because he is nailed to the cross, they attack the Church because it doesn’t use violence, they repress the people because they cannot defend themselves,” tweeted Bishop Silvio Baez, forced into exile last year, after a series of death threats he and his family had received for his vocal opposition to Ortega.

“They deceive themselves,” he wrote. “The image of the Blood of Christ shows today the pain of the suffering Nicaraguan people who will certainly be resurrected.”

Crux strives to cover the worldwide institution of the Catholic Church, from the papacy and the hierarchy to the rank and file, and anyone with an intelligent word to say about Catholic affairs. We’ll explore the theology, doctrine, liturgy, practices, and traditions of Catholicism in the context of the life of modern-day Catholics, striving to deliver the very best in smart, wired and independent Catholic news both in the United States and throughout the world
Prev Next