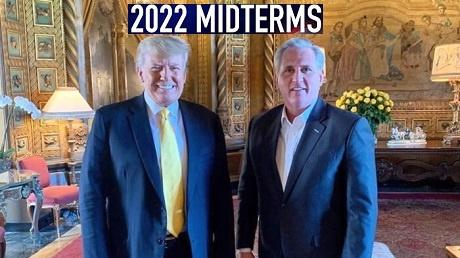 Trump Meets With GOP House Leadership. Former President Donald Trump held a meeting with House Minority Leader Kevin McCarthy (R-Calif.) on Thursday in Florida, said Trump’s team in a statement, while including a photo of him and the GOP leader.

The two had a “good and cordial” meeting at Trump’s Mar-a-Lago resort in Palm Beach, said Trump’s Save America PAC.

The pair discussed several topics, but the No. 1 priority was “taking back the House” for Republicans in the 2022 midterms, Trump’s team said. They did not elaborate on a strategy or what candidates to promote.

“Trump’s popularity has never been stronger than it is today,” said the statement, “and his endorsement means more than perhaps any endorsement at any time.” Trump now will work with McCarthy on boosting the GOP in the House races.

McCarthy and Trump “worked very well together in the last election and picked up at least 15 seats when most predicted it would be the opposite,” Trump’s team wrote. “They will do so again, and the work has already started.”

In response, McCarthy touted a “united conservative movement” with Trump to stop the “radical Democrat agenda.”

Over their political relationship, Trump and McCarthy rarely butted heads, and McCarthy did not support the second House impeachment effort against Trump. Ten Republicans, including Rep. Liz Cheney (R-Wyo.)—a member of the Republican leadership—voted to impeach the former president.

Several Republicans in the Senate have also suggested they would vote to convict him. On Tuesday, 45 Republicans voted against going ahead with the impeachment trial, slated to start in early February, meaning that it’s unlikely the former president would be convicted.

Any Republican who impeaches or convicts Trump would likely suffer significant political blowback. Various polls have shown that Trump is by far the most popular Republican figure among the party’s voter base.

On Thursday, Rep. Matt Gaetz (R-Fla.), an ally of Trump, is scheduled to hold a rally in Cheyenne, Wyoming, in a bid to oust Cheney from her leadership role. Republicans in the House are slated next week to vote on whether to strip Cheney of her House leadership position.

“It was something that I did with a heavy heart, but I did with a real understanding of the seriousness and the gravity of the moment,” Cheney said the day of the vote to impeach Trump. “My oath to the Constitution is one I can’t walk away from, is one I can’t violate.”

But Republican state Sen. Anthony Bouchard, a gun-rights activist, said he would challenge Cheney. Some Trump allies and family members, including Eric Trump, have said they would move to challenge the Republicans who impeached the former president.

“The swamp was after me,” Bouchard said, reported The Associated Press. “I just don’t think that works any more in Wyoming. I think the people have figured it out.”