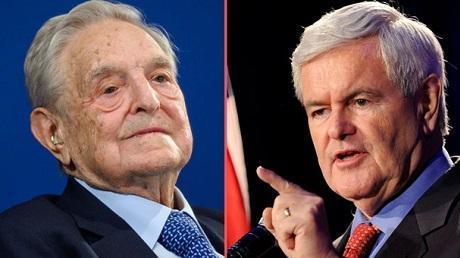 Former Republican House Speaker New Gingrich has warned that the Democratic Party has been bought with George Soros' money and no longer represents the interests of the American people.

Speaking Wednesday, Gingrich argued America is not in the midst of a “normal election.”

He said the Democrats are now “owned by the left” and at “war” with traditional American values.

"Well, all of these Democrats are now basically owned by the left,” Gingrich told “Fox & Friends.”

"They are not going to pick any fights," he added.

"They are owned by people who are financed by George Soros."

Gingrich pointed to district attorneys in large American cities whose campaigns have been financed by Soros.

Gingrich said one result of this mentality is that “we are back to the late 1960s in terms of the rising murder rates and rising crime rates.”

He added that much of the mainstream media, or “propaganda machine of the left,” is ignoring the urban crime crisis.

"Look, I wrote a paper recently suggesting that what we are seeing is a war between two worlds,” the former speaker said, citing Minneapolis as a city that has “surrendered to criminals” because the Democrat-controlled council voted unanimously to abolish the police force.

"It’s not a normal presidential election."

“In fact, they just put out a pamphlet for citizens on how to be mugged without endangering yourself because they don’t have a police force that can achieve anything anymore.”

Gingrich blasted Portland, Seattle, and the south side of Chicago as “a disaster.”

Portland remains a tinderbox of protests rioting and in July hit a 30 year high for most murders in one month.

Seattle, after having a section of its downtown occupied by anarchists, is reportedly planning to close its county prison.

“But I think the average American is beginning to realize this stuff is dangerous,” Gingrich told Fox.

“That’s why by three to one they don’t want to defund the police.”

As Neon Nettle reported, Soros recently announced he is pumping another staggering amount of cash into the radical Black Lives Matter organization.

With America burning under the leftist push for socialism, Hungarian-born financier Soros announced he is donating another $220 million to the “Black Lives Matter movement.”

Much of Soros' money is going into efforts to defund the police and control 2020 voting systems, his foundation revealed.

“This is the time for urgent and bold action to address racial injustice in America,” Alex Soros, George Soros’ son and deputy chair of the Soros family’s “Open Society Foundations,” said in a statement.

“These investments will empower proven leaders in the black community to reimagine policing, end mass incarceration, and eliminate the barriers to opportunity that have been the source of inequity for too long,” Alex Soros said.