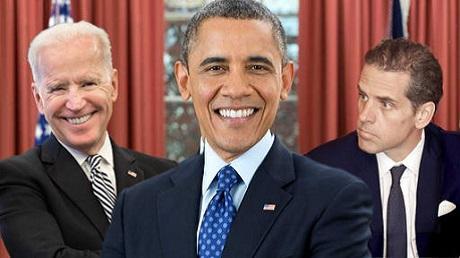 Top Obama-administration officials were aware that Hunter Biden’s position on the board of directors of a Ukrainian gas firm was problematic but ignored repeated warnings from senior officials, according to a report (pdf) by Republicans on two Senate committees.

In 2014, Hunter Biden, son of then-Vice President Joe Biden, joined the board of Burisma, a Ukrainian gas company owned by an oligarch whom U.S. authorities viewed as corrupt. The Senate Finance and Homeland Security and Governmental Affairs committees concluded that the problems with Hunter Biden’s role with Burisma extended beyond mere perception of a conflict of interest and had an impact on U.S. policy in Ukraine.

“What the Chairmen discovered during the course of this investigation is that the Obama administration knew that Hunter Biden’s position on Burisma’s board was problematic and did interfere in the efficient execution of policy with respect to Ukraine,” the report states.

“Moreover, this investigation has illustrated the extent to which officials within the Obama administration ignored the glaring warning signs when the vice president’s son joined the board of a company owned by a corrupt Ukrainian oligarch.”

While adding little of significance to what was already known about Biden’s involvement with Burisma, the Senate report provides additional evidence about what the Obama administration, including Joe Biden himself, knew about the apparent problem and how little was done to remedy it.

The report notably skirts by the episode during which Joe Biden, as vice president and lead official on Ukraine, forced the ouster of a top prosecutor, Viktor Shokin, who was at the time investigating Burisma. The report devoted a single sentence and one footnote to the incident and doesn’t mention that Shokin, in a sworn statement, has said that he was removed due to pressure from Biden because of the investigation into Burisma.

The offices of Sen. Chuck Grassley (R-Iowa) and Sen. Ron Johnson (R-Wis.), chairmen of the two committees that led the investigation, didn’t immediately respond to requests for comment.

According to the report, the vice president’s staff prepared talking points for Biden that called for non-answer to questions involving the owner of Burisma, Mykola Zlochevsky.

“I’m not going to get into naming names or accusing individuals,” the talking points said.

While it was known that senior State Department official George Kent had brought up his concerns about Hunter Biden and Burisma to the office of Vice President Joe Biden in early 2015, the Senate report found that Kent reiterated his concerns to senior State Department officials more than a year later. The report found no evidence that the Obama administration took any action in either case.

“The presence of Hunter Biden on the Burisma board was very awkward for all U.S. officials pushing an anti-corruption agenda in Ukraine,” Kent wrote in an email to senior State Department officials, including Deputy Assistant Secretary Bridget Brink and U.S. Ambassador Marie Yovanovitch.

Kent and Yovanovitch testified in the impeachment proceedings late last year. In his testimony, Kent told lawmakers about a $7 million bribe given to the office of Shokin’s predecessor to drop the investigation into Burisma. The new Senate further illuminated the episode, showing that a senior Justice Department official referred Kent’s information about the bribe to the FBI. The committees are now looking into what the bureau did with the referral.

The committees found that another senior State Department official, Amos Hochstein, raised his concerns about Burisma directly with Vice President Joe Biden in 2015.

“We were starting to think about a trip to Ukraine, and I wanted to make sure that he was aware that there was an increase in chatter on media outlets close to Russians and corrupt oligarchs-owned media outlets about undermining his message—to try to undermine his message and including Hunter Biden being part of the board of Burisma,” Hochstein told the committees.

Victoria Nuland, who was also a senior State Department official at the time, told the committees that Hochstein aired his concerns to Biden because “he was concerned that the Russians were using Hunter Biden’s role with Burisma to sow disinformation.”

Hochstein also spoke about the issue to Hunter Biden, who had contacted him shortly after he raised the issue with the vice president. Hunter Biden invited Hochstein to discuss the issue at a coffee shop in Georgetown in November 2015.

The committee found that Hunter Biden’s role with Burisma was particularly troublesome because the U.S. was simultaneously pushing an anti-corruption agenda in Ukraine.

“Because the vice president’s son had a direct link to a corrupt company and its owner, State Department officials were required to maintain situational awareness of Hunter Biden’s association with Burisma. Unfortunately, U.S. officials had no other choice but to endure the awkwardness of continuing to push an anti-corruption agenda in Ukraine while the vice president’s son sat on the board of a Ukrainian company with a corrupt owner earning tens of thousands of dollars a month,” the report states.

The report also provides additional evidence to show that then-Secretary of State John Kerry was aware of the Biden–Burisma nexus, despite his public statements to the contrary. Kerry’s chief of staff told investigators that he personally discussed the issue with the secretary of state, according to the report.

Beyond Ukraine, the committees discovered a number of other suspicious financial connections between Hunter Biden and foreign entities, including Chinese nationals with ties to the Chinese Communist Party (CCP) and the former wife of the mayor of Moscow.

The female Russian billionaire Elena Baturina wired $3.5 million to a company co-founded by Hunter Biden on Feb. 14, 2014, days before the uprising in Ukraine that toppled the nation’s President Viktor Yanukovych.

The report also details extensive financial ties between Hunter Biden, other members of the Biden family, and Chinese nationals with CCP ties.

“The records acquired by the Committees show consistent, significant, and extensive financial connections among and between Hunter Biden, James Biden, Sara Biden, Devon Archer, and Chinese nationals connected to the Communist regime and PLA [People’s Liberation Army] as well as other foreign nationals with questionable backgrounds,” the report states.

“These connections and the vast amount of money transferred among and between them don’t just raise conflicts of interest concerns, they raise criminal financial, counterintelligence and extortion concerns.”

Republicans released the report with less than six weeks left before the presidential election on Nov. 3, in which Biden is running against Trump. The Biden campaign accused the Republicans of releasing the report to help Trump’s reelection. The Trump campaign insinuated that the money pouring into Hunter Biden’s accounts was meant to influence U.S. policy.