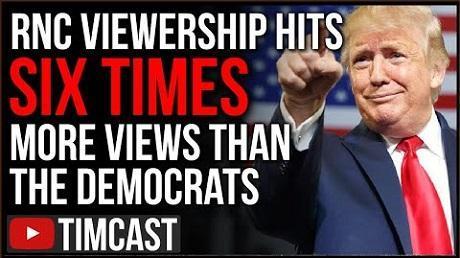 RNC 6x more views than DNC. First Night Of RNC Gets Nearly Six Times More Views On CSPAN Than DNC A Week Prior.

The C-SPAN live stream of the start of the RNC had roughly 440,000 views, compared to the DNC’s opening night, which brought in 76,000 on Aug. 17, Nielsen Media Research recorded according to The Hill.

Michelle Obama is the keynote speaker at tonight's Democratic National Convention. In a short excerpt from the speech provided by the DNC, the former first lady praised Joe Biden as a “profoundly decent man.”

Biden’s speech Thursday night of the DNC was watched by 21.8 million people on TV, which was more than the other major speeches given at the convention earlier in the week, but was still a 21% drop from former presidential nominee Hillary Clinton’s acceptance speech at the DNC in 2016.

Biden’s speech was also 38% lower than President Trump’s acceptance speech at the RNC in 2016, which attracted 34.9 million viewers.

Speakers at the second night of the RNC include First Lady Melania Trump, Secretary of State Mike Pompeo, Republican Kentucky Sen. Rand Paul, and Nicholas Sandmann, the Kentucky high school student who the Washington Post settled a defamation lawsuit with following the paper’s misrepresentation of him in 2019.

Marlo Safi is a 2018 graduate of the University of Pittsburgh. When she is not reporting on subjects like religion and culture, she is cooking or writing about cooking.