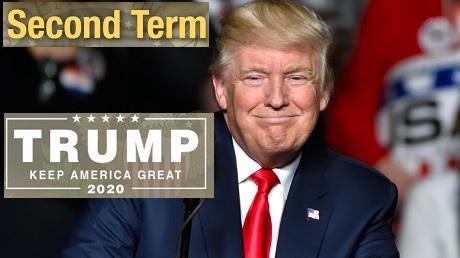 President Trump has released his agenda for a second term and it is a counter to the socialism, racism, and darkness that Joe Biden and Kamala Harris are running on.

The Democrat convention was an infomercial for tyranny and both Biden and Harris vow to force the entire nation to wear masks if they are able to slither into the White House next year.

But Americans have always valued hope over fear and it was only six months ago when they were the beneficiaries of the greatest economy in history before Democrats and their media fear pimps were able to force the nation into lockdown over COVID-19.

Instead of masks, submission, indoctrination and bending the knee to Marxist-inspired Black Lives Matter goons, Trump's vision for the future of the country including a return to normal in 2021 which is a "stark contrast to the gloomy vision of America projected by Joe Biden and Democrats."

Building on the incredible achievements of President Donald J. Trump’s first term in office, the President’s re-election campaign today released a set of core priorities for a second term under the banner of “Fighting for You!” President Trump’s boundless optimism and certainty in America’s greatness is reflected in his second-term goals and stands in stark contrast to the gloomy vision of America projected by Joe Biden and Democrats.

President Trump will further illuminate these plans during his acceptance speech Thursday at the Republican National Convention. Over the coming weeks, the President will be sharing additional details about his plans through policy-focused speeches on the campaign trail.

President Trump: Fighting for You!

"Made in America" Tax Credits

END OUR RELIANCE ON CHINA

Tax Credits for Companies that Bring Back Jobs from China

No Federal Contracts for Companies who Outsource to China

Put Patients and Doctors Back in Charge of our Healthcare System

Protect Our Veterans and Provide World-Class Healthcare and Services

Provide School Choice to Every Child in America

End Sanctuary Cities to Restore our Neighborhoods and Protect our Families

Require New Immigrants to Be Able to Support Themselves Financially

INNOVATE FOR THE FUTURE

Partner with Other Nations to Clean Up our Planet’s Oceans

Wipe Out Global Terrorists Who Threaten to Harm Americans

The choice could not be more clear for Americans who must reject Lyin' Biden and the Democrats and their darkness that would transform the nation into a dystopian nightmare.