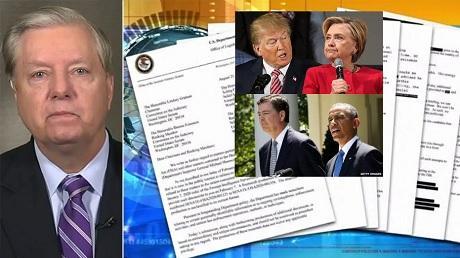 Senate Judiciary Chairman Lindsey Graham (R-S.C.) told reporters on Sunday that he believes the FBI sought to give former presidential candidate Hillary Clinton an advantage over then-candidate Donald Trump before it could pursue a FISA warrant against individuals who were working for Trump.

“The FBI did the right thing by briefing Clinton and failed to do the right thing by never specifically briefing President Trump about their concerns,” Graham said in a statement on Sunday. He noted that the federal law enforcement agency declassified documents in recent days that demonstrated a “clear double standard” to benefit Clinton and harm Trump.

The declassified documents, his office said, showed that the FBI’s leadership in 2015 “sought to give the Clinton campaign a defensive briefing before an FBI field office could pursue a FISA warrant related to a threat posed to the Clinton campaign by a foreign government.”

But a year later, when there was a similar threat to Trump’s campaign, the FBI didn’t provide him with a defensive briefing and instead opened the now much-derided Crossfire Hurricane investigation to pursue FISA, or Foreign Intelligence Surveillance Act, warrants against Trump.

“When it came to the Trump campaign, there were four counterintelligence investigations opened against Trump campaign associates. Not one time was President Trump defensively briefed about the FBI’s concerns,” Graham remarked. “Even more egregious, when the FBI gave a generic briefing to the Trump campaign about foreign influence, not only did they fail to mention the specific concerns about Trump associates, they sent an FBI agent into the briefing to monitor President Trump and General [Mic,hael] Flynn.” 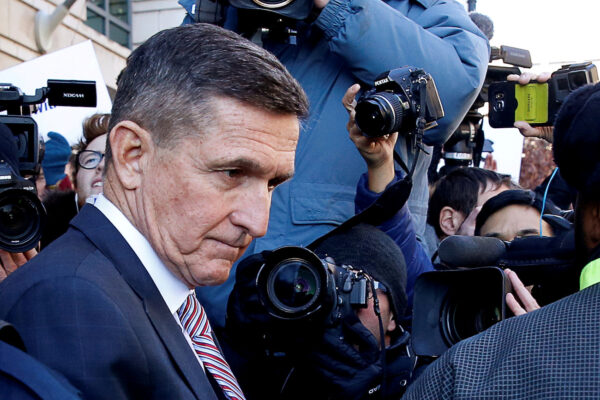 Former national security adviser Lt. Gen. Michael Flynn passes by members of the media as he departs after his sentencing was delayed at U.S. District Court in Washington on Dec. 18, 2018. (Joshua Roberts/Reuters)

Graham noted in a video interview on Fox News Sunday that foreign governments will always attempt to interfere with and influence U.S. elections.

But there were “four counterintelligence investigations opened by the FBI against the Trump campaign” in 2016, he said. “They never tell him about it so he can fix it. … They never told Trump ‘oh, by the way, you’ve got a Carter Page problem, you’ve got a George Papadopoulos problem.’ As a matter of fact not only did they not tell Trump, they used a generic briefing to spy on Trump.”

Moving forward, Graham said there needs to be better safeguards for candidates to determine whether there are foreign governments trying to interfere with their respective campaigns.

If not, there is a “double standard” and “political bias” at play, he said. “I cannot tell you how inappropriate it is to do what they did to Trump. They never told him about the problem, they used the problem as a way to spy on him,” he said.

In July, the U.S. National Counterintelligence and Security Center reported China, Russia, and Iran are attempting to undermine the 2020 election.

However, the agency placed special emphasis on the Chinese Communist Party (CCP), saying that Beijing is ramping up its efforts to shape American policy and is pressuring political figures while countering criticism of the regime ahead of the 2020 election and poses a more severe threat to American democracy than Russia or Iran.