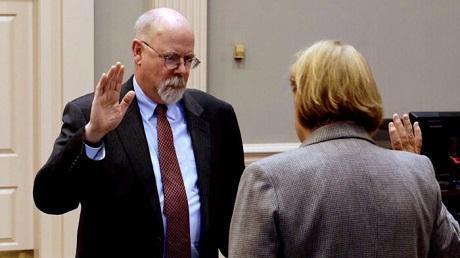 U.S. Attorney John Durham on August 14 charged a former FBI attorney with making a false statement, the first prosecution brought as part of an inquiry into the handling of Crossfire Hurricane, the codename for the FBI’s troubled investigation of the Trump campaign.

Durham charged Kevin Clinesmith with one count of making a false statement committed in the process of vetting for a warrant application to spy on a former Trump campaign associate, Carter Page.

According to a criminal information filed on Friday in a federal court in Washington, Clinesmith altered the content of an email he forwarded to an FBI special agent to say that Page was “not a source” for the CIA, even though the CIA had advised Clinesmith that the opposite was true. The special agent then relied on the adulterated email to sign off on a Foreign Intelligence Surveillance Act (FISA) warrant application used to spy on Page.

According to a report by the Department of Justice Inspector General and the criminal information, Clinesmith contacted the CIA liaison in June 2017 to find out if Page was a source for the agency as part of preparation to renew the spy warrant. The liaison responded with a list of documents and advised Clinesmith that Page has provided direct reporting to the CIA in the past.

When the DOJ inspector general asked Clinesmith why he subsequently described Page as “not as source” for the CIA, Clinesmith said that he recalled the liaison “saying that [Page] was not a source of theirs,” but rather “incidentally reporting information via a source of theirs.” When the inspector general asked the CIA liaison about the same, the liaison said “her email stated just the opposite,” according to the report.

Clinesmith’s attorney, Justin Shur, told The Associated Press that his client is expected to plead guilty. Shur did not respond to a request from The Epoch Times to confirm the report.

President Donald Trump, who had long asserted that the Obama administration spied on his campaign, told reporters at the White House “that’s just the beginning I would imagine because what happened should never happen again.”

“The fact is they spied on my campaign and they got caught and you’ll be hearing more,” the president added.

Before the bureau filed its first application to spy on Page, the CIA had informed it in August 2016 that Page was an “operational contact” for the agency and that he had informed the CIA about his contacts with Russian intelligence officers. The FBI never included this information in the four spy warrant applications to the secret Foreign Intelligence Surveillance Court.

Before the FBI applied for the fourth and final spy warrant on Page, he had publicly stated that he has worked with the CIA. This appears to have prompted the FBI’s supervisory special agent to ask Clinesmith to reach out to the CIA to see if Page was a source for the agency.

“We need some clarification on [Carter Page]. There is an indication that he may be a … source. This is a fact that we would need to disclose in our next FISA renewal,” Clinesmith wrote to the CIA liaison, before asking for confirmation if Page was a source.

Clinesmith’s tenure at the FBI ended on September 21, 2019, according to the criminal information.

“While the FBI does not comment on ongoing legal matters, it is important to note the employee in this case no longer works at the FBI resigning before an internal disciplinary process was completed.”

In addition to working as the attorney on the Crossfire Hurricane investigation, Clinesmith worked on the probe into Hillary Clinton’s unauthorized use of a private email server to conduct government business during her tenure as secretary of state.

Clinesmith’s work on the Clinton probe earned him an entire section in a separate IG report on the Clinton investigation, which found that he sent numerous politically charged messages ridiculing then-candidate Trump. After Trump was elected in November 2016, Clinesmith wrote to another attorney, “I’m just devastated.”

“I can’t wait until I can leave today and just shut off the world for the next four days,” he wrote. “Plus, my god damned name is all over the legal documents investigating his staff.”

These and other messages led to Clinesmith’s removal from the special counsel inquiry by Robert Mueller, who took over the Crossfire Hurricane probe in May 2017.

Clinesmith was one of several FBI personnel present during the interview of Trump campaign adviser George Papadopoulos, according to a transcript of Papadopoulos’s congressional deposition.

Clinesmith was among a group of key FBI officials who displayed intense political bias while working on two of the FBI’s most consequential investigations in years, involving the two top presidential candidates in the 2016 election, Clinton and Trump. The bias, without exception, was in favor of Clinton and against Trump.

The inspector general, Michael Horowitz, ultimately concluded that while the bias clouded the two investigations, his team couldn’t find evidence that the bias contributed to any investigative decisions. Horowitz found it inexplicable how so many errors could have been made by teams of hand-selected people working on the most significant FBI probe at the time.

“While the FBI does not comment on ongoing legal matters, it is important to note the employee in this case no longer works at the FBI resigning before an internal disciplinary process was completed,” an FBI spokesperson told The Epoch Times in an emailed statement.

Attorney General William Barr signaled on Thursday that an announcement from Durham would be coming Friday.

“There are going to be significant developments on this before the election,” Barr told Fox News host Sean Hannity on Thursday night.

Barr said that the development would not be “earth-shattering,” but provide “an indication things are going along at a proper pace, as dictated by the facts in this investigation.”

Barr told Hannity that the investigation is going quickly, despite some delay due to the CCP (Chinese Communist Party) virus pandemic. He added that he is “satisfied” with the progress Durham has made.

Last month, Barr said that the November elections will not delay Durham’s investigation and pending report.

Barr appointed Durham in May last year to examine the origins of the FBI’s Russia-Trump collusion investigation, codenamed “Crossfire Hurricane.” Durham is looking to determine whether intelligence collection on Trump’s presidential campaign by top Obama-administration officials was “lawful and appropriate.” He is also assessing whether the FBI’s surveillance of Page was free of improper motive.

The investigation was designated a formal criminal investigation in October 2019, which gives Durham’s team the ability to issue subpoenas, impanel a grand jury, compel witnesses to give testimony, and bring federal criminal charges. This includes targeting the conduct of current and former senior FBI officials who were involved in obtaining a warrant in October 2016 to surveil Page and sending at least two spies to target Trump campaign adviser George Papadopoulos.

Department of Justice Inspector General Michael Horowitz concluded last year that the four warrant applications the FBI used to spy on Page contained 17 significant errors and omissions. The inspector general told Congress it was inconceivable how a handpicked team working the most sensitive case at the FBI could commit so many mistakes. The FBI subsequently conceded that the errors invalidated two of the spy warrants.

A separate audit by Horowitz found no such consequential errors in a sample of 29 surveillance applications unrelated to Crossfire Hurricane.

The key FBI personnel who handled Crossfire Hurricane also worked on the investigation of Hillary Clinton’s use of an unauthorized private email server to conduct government work. In an earlier review, Horowitz concluded that the Clinton-email probe was clouded by anti-Trump and pro-Clinton bias expressed in messages by FBI personnel. Notably, special agent Peter Strzok and FBI attorney Lisa Page discussed stopping Trump from becoming president and creating an “insurance policy” in the unlikely event that he would win the election.

Barr had signaled in May that he was not expecting former President Barrack Obama and former Vice President Joe Biden to face criminal indictments as a result of Durham’s investigation, saying “I don’t expect Mr. Durham’s work will lead to a criminal investigation of either man. Our concern over potential criminality is focused on others.”

He told Hannity on Thursday that “if people crossed the line, if people involved in that activity violated criminal law, they will be charged” if the Department of Justice feels that it can prove a crime beyond a reasonable doubt.

The FBI’s Crossfire Hurricane counterintelligence investigation into the 2016 Trump campaign was launched in July 2016 to investigate allegations of Russian interference in the 2016 U.S. presidential elections, including possible links between Russia and any political campaigns.

The investigation was taken over in May 2017 by then-special counsel and former FBI Director Robert Mueller. By April 2019, he concluded that the investigation found no evidence to establish that Trump or his campaign had knowingly conspired or coordinated with the Russian government to sway the outcome of the election, although the Russian government was found to have interfered in the 2016 election.

President Donald Trump recently repeated his allegation that previous administration officials had spied on his campaign “both before and after” his presidential victory, and committed treason in doing so.

“They spied on my campaign, which is treason. They spied both before and after I won. Think of that. Using the intelligence apparatus of the United States to take down a president,” Trump said during a live phone interview with Fox Business.