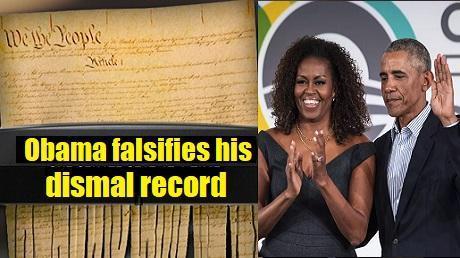 Michelle Obama famously said, "When they go low, we go high."  She should have reminded her husband before he gave his speech for the online Democrat convention.

Standing in a room in Philadelphia, with the words "Writing the Constitution" over his right shoulder, Obama gave a speech that almost wholly ignored Biden, whom he'd ostensibly come to praise.  Instead, Obama viciously attacked Trump and did a constitutional rewrite that allowed him to cast Trump as a constitutional threat.

From the start, Obama was up to his old tricks.  Even while he wanted to use the Constitution to challenge Trump, he couldn't praise it.  Instead, he opened by describing it as an imperfect document that "allowed for the inhumanity of slavery and failed to guarantee women — and even men who didn't own property — the right to participate in the political process."

Democrats aren't progressive; they're regressive.  They draw power by telling the public that Democrats are the only thing standing between Americans and the Constitution as ratified in 1791 as if nothing has changed since then.

Still, Obama conceded that the Constitution has some virtue.  That's why, said President Obama, who once boasted that "I've got a pen, and I've got a phone," was shocked that Trump has never shown "some interest in taking the job seriously, that he might come to feel the weight of the office and discover some reverence for the democracy that had been placed in his care."

Without irony, Obama was describing himself.  He was a famously lazy president, compared to the Trump dynamo, he massively enriched those close to him (especially Biden), and he used the presidency as a chance to rock with rappers and take exotic trips.

Obama naturally blamed Trump for Wuhan virus deaths and unemployment.  It's as if it never happened that Democrat governors destroyed their economies with lockdowns and turned old age homes and care facilities into slaughterhouses.

Having insulted Trump, Obama gave a trite and short homage to Biden.  He touched upon Biden's dead wife and children; Biden's habit of treating people with respect and dignity ("You're a lyin' dog-faced pony soldier," "You're full of s**t," "You're a damn liar"); and his decency (Biden enriched Hunter decently).  Obama even said Biden made Obama a better president.

Having damned Biden with faint praise, Obama next praised his own policies and occasionally threw Biden's name into the mix when he did so.

Thus, Obama boasted about how he and Joe saved America from Ebola, a disease that never left West Africa, and from H1N1, a disease that sickened 60 million Americans but that Obama ignored for half a year.

Obama extolled Obamacare, which passed thanks to lies so big that even leftists called him out.  Tens of millions of Americans then lost their insurance.

Obama praised the work he did to end the recession, something that was the slowest, grimmest recovery in American history.  It was Trump who put the economy on steroids by lowering taxes, cutting regulations, rewriting trade agreements, and weakening China's hold on the economy.

Obama gloated about how he and Joe restored America's standing in the world by standing with "democracy, not dictators."  Those not-dictators included Raúl Castro, Recep Erdoğan, the Muslim Brotherhood, China, and Putin (until Putin was turned into a weapon against Trump).  And, of course, we cannot forget the Iranian mullahs whom Obama supported during the Green Revolution and to whom Obama sent billions in cash and a license to produce nuclear bombs.

Having self-praised, Obama contended that Trump was destroying democracy by using "the men and women of our military ... as political props" deployed against those famous "peaceful protesters."  There's a lot to unpack there.  First, Obama left the military in the weakest condition it's been since before WWII, as well as using it as a grand social justice experiment.

Second, was Obama referring to the peaceful protesters who destroyed 1,500 buildings in Minneapolis/St. Paul?  The ones who, in Portland, beat random people, who almost killed a man, and who've spent 83 days battling law enforcement there?  Or maybe he's talking about CHAZ/CHOP?  Who knows?  Obama doesn't.  He's just stirring the pot.

There was more, but it was boilerplate social democrat pap of the type you've heard repeatedly.

Thankfully, Trump is...well, Trump, and he tweeted out a vigorous, real-time opposition to Obama's unscrupulous speech:

HE SPIED ON MY CAMPAIGN, AND GOT CAUGHT!

WHY DID HE REFUSE TO ENDORSE SLOW JOE UNTIL IT WAS ALL OVER, AND EVEN THEN WAS VERY LATE? WHY DID HE TRY TO GET HIM NOT TO RUN?

HE SPIED ON MY CAMPAIGN, AND GOT CAUGHT!

All in all, Obama's was both a singularly despicable statement from a former president and a disgraceful example of projection as Obama imputed to President Trump all the sins Obama himself committed during his presidency.