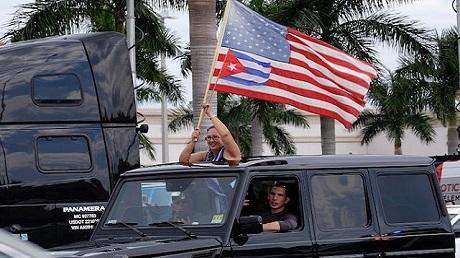 On October 10, 2020, at 9:30 a.m., cars will gather in two of the parking lots of Magic City Casino in a central area in Miami to carry out a caravan of vehicles protesting over the growing presence of communist and socialist ideology in the United States and the Western Hemisphere.

Organized by a “Patriotic Committee” made up of key coalitions and organizations within the Cuban exile community – such as the Assembly of the Cuban Resistance – the event will rally a call for the liberation of Cuba, Venezuela, and Nicaragua, and express Hispanic support for firm policies against Chinese and Russian expansionism in the Americas.

While the expected long line of vehicles travels in a route around mainly Hispanic areas of Miami, close to its downtown, local radio station La Poderosa (the Powerful One) 670 AM will transmit the event live as well as a seminar transmitted from the main gathering site itself, where experts on communism and socialism will present the danger and harm that it poses to the region.

Participants in the caravan will thus “attend” conversations on the history of communism and socialism while driving in their cars.

The seminar will be moderated by two living experts on the evils of totalitarianism: editor and writer Angel D’Fana, who spent 20 years as a political prisoner in Cuba, and Luis Zúñiga, who spent 19 years as a political prisoner in Castro’s gulags. Among the featured guests will be Trevor Loudon, a syndicated columnist and prominent researcher into communist penetration in the United States; Alvaro Alba, an award-winning historian and author who is an expert on the history of Communism in Russia and Central Europe; Bay of Pigs veteran and educator, researcher and author Frank De Varona who will bring his testimony about the rise of Marxism in mainstream politics in the Western Hemisphere; political scientist and media personality Julio M. Shiling, who will speak about the rise of cultural Marxism in the educational and cultural institutions of the United States; and Breitbart National Editor Frances Martel, who will speak about the pervasive threat of Chinese Communist imperialism throughout the world.

Mexican attorney Rene Bolio – who heads the International Justice Cuba Commission, which has researched at length the crimes against humanity committed by the Communist Party regime in Cuba – will also be among the presenters at the seminar.

Organizers seek to use the event to further strengthen a coalition of Hispanic organizations with a unified anti-communist agenda to press for the liberation of Cuba, Nicaragua, and Venezuela, as well as defend democracies in Chile and Colombia that are confronting far-left rioters seeking revolution.

The event will also emphasize support for Hong Kong in its struggle to preserve its citizen freedoms against the Chinese Communist Party, and for Taiwan, particularly in light of increased Chinese threats of military aggression against the island democracy.

The Anticommunist Caravan initiative is the result of the strengthened unity among Cuban pro-democracy organizations in the United States, as well as their close collaboration with anti-Communist resistance movements throughout the region and the world. 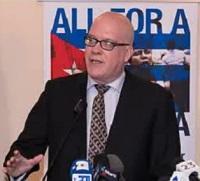 Author: Dr. Orlando Gutierrez-Boronat is a writer, educator, and co-founder and spokesman for the Cuban Democratic Directorate (Directorio).