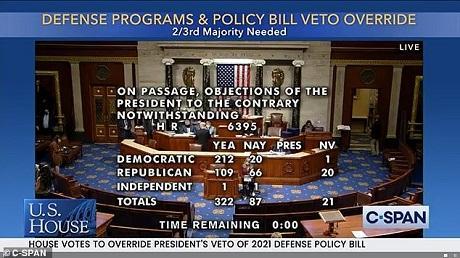 The override measure, passed by a 322-87 vote, is now headed to the Senate for consideration, where Senate Majority Leader Mitch McConnell (R-Ky.) has indicated that his chamber would vote on Tuesday to override Trump’s veto. The override would need a two-thirds majority to succeed.

“In the event that the president has vetoed the bill, and the House has voted to override the veto, the Senate would have the opportunity to process a veto override at that time,” McConnell previously said on Dec. 22.

The bill, the 2021 National Defense Authorization Act (NDAA), outlines the national security policy for the Department of Defense in 2021 and authorizes $740 billion in spending. It passed the House on Dec. 8 by a vote of 335–78, and later passed the Senate on Dec. 11 by a vote of 84–13.

Trump vetoed the bill on Dec. 23, saying that it fails to remove Section 230 of the Communications and Decency Act, among other reasons. Section 230 provides blanket liability protections for social media and tech companies.

“Unfortunately, the Act fails to include critical national security measures, includes provisions that fail to respect our veterans and our military’s history, and contradicts efforts by my Administration to put America first in our national security and foreign policy actions,” the president said in a Dec. 23 statement. “It is a ‘gift’ to China and Russia.”

There’s no mention in the NDAA defense bill of Section 230 of the Communications and Decency Act, he noted. Trump said the 1996 law “must be repealed,” as it facilitates “the spread of foreign disinformation online,” making it a “serious threat to our national security and election integrity.”

Both Republicans and Democrats have called for Section 230 to be repealed. Conservatives have said it enables social media companies such as Twitter and Facebook to make discretionary choices in censoring dissenting views, while some progressives have said the law fails to take “hate speech” posted on those platforms into account.

Trump, in his statement, noted that the NDAA doesn’t support his ability to “withdraw troops from Afghanistan, Germany, and South Korea.”

“Not only is this bad policy, but it is unconstitutional. Article II of the Constitution makes the President the Commander in Chief of the Army and Navy of the United States and vests in him the executive power. Therefore, the decision regarding how many troops to deploy and where, including in Afghanistan, Germany, and South Korea, rests with him. The Congress may not arrogate this authority to itself directly or indirectly as purported spending restrictions.”

The House late on Monday also voted to increase COVID-19 relief direct payments from $600 to $2,000, a measure supported by the president. Author: Mimi Nguyen Ly is a reporter based in Sydney, Australia. She currently focuses on U.S. News. @MimiNguyenLy.