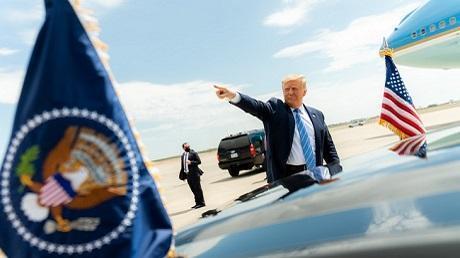 “We’re here this afternoon to change the course of history. After decades of division and conflict, we mark the dawn of a new Middle East,” Trump declared. “Thanks to the great courage of the leaders of these three countries, we take a major stride toward a future in which people of all faiths and all backgrounds live together in peace and prosperity.”

"We're here this afternoon to change the course of history.

After decades of division and conflict, we mark the dawn of a new Middle East." pic.twitter.com/DDe3Y9EwDM

Trump celebrated the deals with Israeli Prime Minister Benjamin Netanyahu and the foreign ministers of the UAE and Bahrain.

That deal followed a string of recent diplomatic victories. Last month, Trump brokered a deal in which the United Arab Emirates (UAE) officially recognized Israel. Two weeks ago, he announced that two European countries, Muslim-majority Kosovo and Christian-majority Serbia, had reached a peace deal between themselves and with Israel and would set up embassies in Jerusalem.

Last week, Bahrain and Saudi Arabia announced they would open their skies to Israeli flights to the UAE. As part of its rapprochment with Israel, the UAE agreed to order hotels to serve Kosher foods in Abu Dhabi, delivering a powerful symbol of Jewish acceptance in a notoriously anti-Semitic part of the world.

The Palestinians tried to force the Arab League to condemn the UAE-Israel deal, to no avail.

It is no small feat to convince Arab Muslim nations to normalize ties with Israel, let alone get them to mandate kosher foods in an Arab capital. Yet Trump’s accomplishments also include convincing Muslim-majority Kosovo to open an embassy in Jerusalem, recognizing Israel’s historic capital as the capital of a modern Jewish state.

It seems likely that the assassination of Iranian Quds Force General Qasem Soleimani has contributed to the climate in which Arab states are emboldened to make peace deals with Israel. Iran had assembled a network of terror across the Middle East, forcing its hatred for Israel on other countries. Soleimani reportedly led that network, and his death has left Iran reeling.

One Norwegian parliamentarian and one Swedish parliamentarian both nominated Trump for the Nobel Peace Prize. The Norwegian, Christian Tybring-Gjedde, highlighted the historic UAE peace deal while the Swede, Magnus Jacobsson, focused on the Serbia-Kosovo deal.

President Barack Obama received a Nobel Peace Prize for his “extraordinary efforts to strengthen diplomacy and cooperation between people.” President Donald Trump should receive a Nobel Peace Prize for his extraordinary results at establishing historic diplomacy in the Middle East. Even so, it seems these nominations are likely to go nowhere. The Nobel committee is likely to get too stuck on “Orange Man Bad” to reward the orange man’s historic results in the same way it honored Obama’s efforts.

Nobel Prize or no, Trump has delivered astounding results.