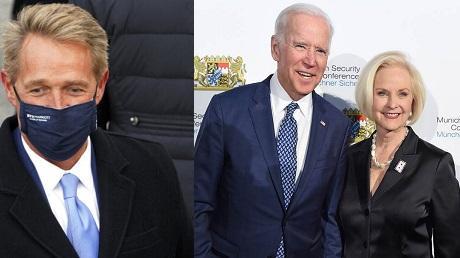 Several Republican lawmakers are getting criticized by their state’s party leadership. This comes as the Republican parties of Arizona and Allegan County in Michigan voted to censure several elected officials.

The censure votes, which formally express discontent for party members, comes amid backlash over both states turning blue in the general election. Additionally, party members are being called out for supporting Democrat efforts to impeach President Trump for a second time.

The censures accused Ducey of executive overreach for his handling of the coronavirus pandemic and failure to overturn the election results in favor of President Trump. Meanwhile, Flake and McCain are coming under immense fire for their support for Joe Biden and divergence from President Trump.

“And if all of us cannot have the resolve here to look into our legislative district committees, our county committees and have the most disciplined two years of our lifetimes, we may lose Arizona forever,” Bower continued.

Earlier this week, the Allegan County Republican Party approved a resolution to censure longtime Republican congressman Fred Upton. The committee decried Upton for allegedly ignoring the voices of constituents and party members when voting for impeachment.

“The final straw for me was obviously what happened last week: the President’s remarks that his actions, in his words, were totally appropriate as he called these folks patriots as they were tearing down the capitol,” stated the Michigan representative.

Although censure votes don’t carry any formal consequences, they do show the party’s waning confidence in lawmakers’ ability to lead the party. This could lead to primary challengers who strictly adhere to party principles gaining more support than censured incumbent.