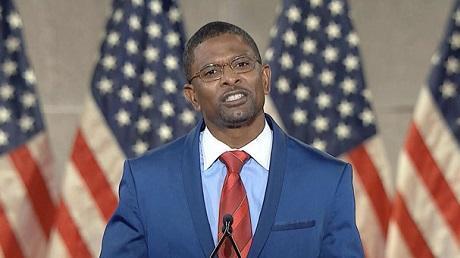 Brewer praised President Donald Trump's record on race and condemned the left-wing media for trying to smear him as a racist.

The former NFL player recalled his experience as a black man growing up in Texas.

“I remember my dad’s bravery when he personally stood up against a KKK rally in my town,” he said.

"I’ve seen it firsthand in America. It has no resemblance to President Trump.”

Brewer blasted the media for their coverage of Trump and trying to label him as a racist.

“I’m fed up with the way he’s portrayed in the media, who refuse to acknowledge what he’s actually done in the black community,” Brewer continued.

“It’s confusing the minds of our innocent children.”

“Are you going to allow the media to lie to you by falsely claiming he said there are very fine white supremacists in Charlottesville? He didn’t say that. It’s a lie.”

Brewer’s speech was widely applauded by those on social media.

“I love these speeches. Jack Brewer was fantastic. It’s essential that the GOP take its message to minorities. It’s good for the USA, and it will terrify Ds — since all they offer is fear.”

The GOP outreach to African-Americans is so welcome. I love these speeches. Jack Brewer was fantastic. It’s essential that the GOP take its message to minorities. It’s good for the USA and it will terrify Ds - since all they offer is fear.

“Jack Brewer knocks it out of the park!!!”

Jack Brewer knocks it out of the park!!!

[READ MORE] Black Man Saves Cop from Burning Car: 'This Man is My Brother Through Christ'