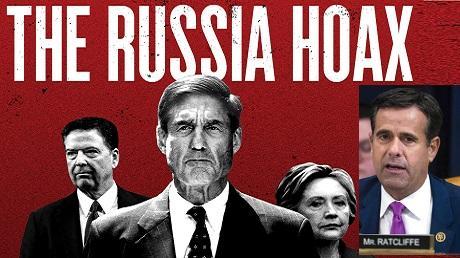 DNI to release 1K pages of Russia hoax docs to DOJ. Director of National Intelligence Releases 1,000 Pages of Material to Durham Investigators. Clinton’s alleged approval of the plot to #StrzokSmearTrump.

Director of National Intelligence John Ratcliffe announced on Oct. 7 that his office has released 1,000 pages of material to John Durham, the federal prosecutor investigating the conduct of the Russia inquiry by FBI and other intelligence agencies.

“At my direction, the Office of the Director of National Intelligence has now provided almost 1,000 pages of materials to the Department of Justice in response to Mr. Durham’s document requests,” Ratcliffe said in a statement.

“I will continue to ensure the Intelligence Community’s responsiveness to the DOJ’s requests. We also look forward to supporting the DOJ in further declassifications consistent with their investigation. As the President has made clear, we must be appropriately transparent with the American people and give them the confidence that the extraordinary work of Intelligence professionals is never misused or politicized.”

The DNI’s announcement comes one day after President Donald Trump wrote on Twitter that he has authorized the full declassification of documents related to the Russia investigation and the probe into Hillary Clinton’s use of an unauthorized email server.

“I have fully authorized the total Declassification of any & all documents pertaining to the single greatest political CRIME in American History, the Russia Hoax. Likewise, the Hillary Clinton Email Scandal. No redactions!” the president wrote around 8:40 p.m. ET. He didn’t elaborate on the nature of the documents.

Later, he wrote that he “can’t believe these con men are not yet being PROSECUTED,” referring to former FBI officials.

Trump’s missive came on the heels of Ratcliffe declassifying a pair of documents which detailed a U.S. intelligence intercept of a Russian intelligence product that claimed that Clinton had approved a plan on July 26, 2016, to smear Trump by linking his campaign to the alleged hack of the DNC by the Russians.

Then-CIA Director John Brennan personally briefed President Barack Obama about the plan, according to the documents as well as a summary letter Ratcliffe released last week. The CIA then forwarded the intelligence to the FBI Director James Comey and Deputy Assistant Director Peter Strzok on Sept. 7, 2016.

Ratcliffe cautioned that since the intelligence came from Russia, it should be taken with a grain of salt since it could be an exaggeration or intentionally misleading. The information was nonetheless significant enough for Brennan to brief to Obama and the National Security Council.

The timing of Clinton’s alleged approval of the plot to smear Trump is significant because five days later, Strzok would open a full investigation into potential coordination between the Trump campaign and Russia. Years later, the allegations were determined to be unfounded by special counsel Robert Mueller.