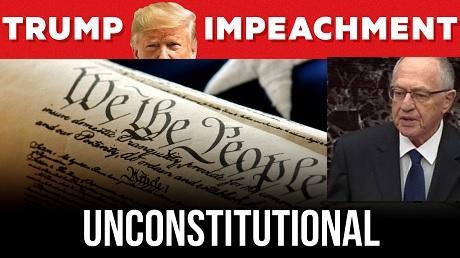 Dershowitz: Trump impeachment unconstitutional. Senate Shouldn't Accept. The subject, the object, the purpose of impeachment is to remove a sitting president

“It will be unconstitutional, but that probably won’t bother the senators,” Dershowitz told Fox News on Sunday. “The Constitution is very clear. The subject, the object, the purpose of impeachment is to remove a sitting president. And there are two precedents. One is very obvious. When President Nixon resigned in anticipation of being impeached and removed, there was no effort to impeach him after he left office.” Former President Richard Nixon opted to resign instead of facing the possibility of a Senate trial in the early 1970s.

“It was clear that the Senate had lost jurisdiction at that point,” he said of the Nixon impeachment. “The proponents cite another precedent. In 1876, there was a failed effort, a failed effort to remove the secretary of war. In an initial vote, the Senate voted close, in a close vote, that they did have jurisdiction to try somebody who had resigned.”

House Democrats and 10 Republicans impeached Trump for a second time, making Trump the first president in U.S. history to be impeached twice. No president has ever been convicted in the Senate.

Last week’s impeachment was based on a speech that Trump gave to supporters as a small group breached the U.S. Capitol building on Jan. 6, forcing lawmakers to flee to secure areas. Several people died at the protest, according to law enforcement officials, while more than 100 rioters involved in the breach have since been arrested.

“There is no jurisdiction. You cannot put citizen Trump on trial. If you could do that, it would be a bill of attainder, number one, putting somebody on trial who was not a sitting president,” Dershowitz said, adding that the “implications would be horrendous.”

“It would mean that if the Republicans came up with a terrific candidate, say, not Donald Trump, to run against President Biden in 2024, the Democrats could simply impeach him,” he remarked. “If you can impeach anyone who is not a sitting president, there are no limits to the power of the Congress to try ordinary citizens. It is plainly unconstitutional. And the Senate should not proceed with this unconstitutional act.”

Dershowitz defended Trump during his Senate impeachment trial in 2020.

A spokesperson for Trump said Saturday that it hasn’t been decided who will represent Trump during the impeachment trial.

“President Trump has not yet made a determination as to which lawyer or law firm will represent him for the disgraceful attack on our Constitution and democracy, known as the ‘impeachment hoax,’” J. Hogan Gidley, a Trump campaign spokesperson, said in a statement early Sunday. “We will keep you informed,” he added.

What’s more, House Speaker Nancy Pelosi (D-Calif.) declined to say when she would transmit articles of impeachment to the Senate.