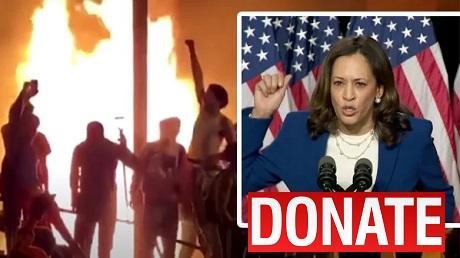 A bail fund promoted by Vice President-elect Kamala Harris that reportedly helped bail out several accused and convicted criminals — at least one with a markedly violent history — is refusing to share the records of the individuals it helped spring from jail in the midst of last year's deadly Black Lives Matter-led riots in Minnesota.

In June 2020, as violent unrest swept the country in the wake of Minneapolis resident George Floyd's death at the hands of city police, Harris — then two months away from being chosen as Joe Biden's running mate — tweeted out a link to the Minnesota Freedom Fund, which claims to "pa[y] criminal bail and immigration bonds for those who cannot otherwise afford to."

Harris's support for the organization amid the riots last year was one of the factors that helped the Minnesota Freedom Fund realize a reported windfall of tens of millions of dollars, a gargantuan increase over the group's 2018 returns of around $100,000. 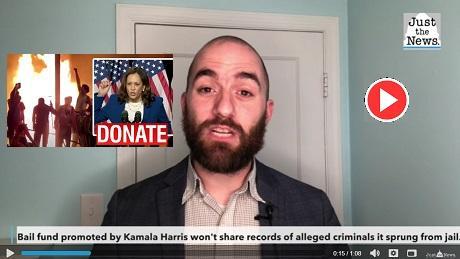 Yet the bail fund was mired in controversy over the summer due to reports that it had helped spring from jail multiple alleged violent criminals, including at least one individual with multiple rape convictions on his rap sheet.

A review by the Washington Post found that MFF helped bail out of jail one individual who allegedly shot at police officers during riots in Minnesota.

Local Fox affiliate KMSP, meanwhile, found that among those who received bail money from the MFF were also "a woman accused of killing a friend [and] a twice convicted sex offender."

Yet a full accounting of the individuals bailed out by the fund last year was not available as of press time.

A representative of the Minnesota Freedom Fund told Just the News via email this week that the records of those it has helped bail out "are available via the Hennepin and Ramsey County jail rosters." The group did not respond to repeated inquiries asking if it kept those records in its own files.

The records within the jail rosters, meanwhile, are not easily accessible.

Tom Lyden, a reporter with KMSP who originally broke that station's coverage of the controversies surrounding the bail fund, said that the documentation "is difficult to find and it is not available online."

"You must go through items in the file, which you can only do at a live terminal," he said.

Lyden said the station used a court document known as a "Request to Return Bail to a Third Party" form to confirm many of the bail cases connected to the Minnesota Freedom Fund.

"In the rundown of court filings, it is usually listed as an 'Other,' along with many other items, so you have to go into each file to find it," Lyden said.

"If there is such a document," he added. "In some cases, the defendant may get to keep the money, and in other cases I've been told it wasn't necessary. So, the [request form] is one indicator, but not the only one."

Lyden said that, in the course of the station's investigations, the fund "confirmed a couple of the cases we suspected they were involved with, but could not find the necessary documentation."

The group's unwillingness to provide records of whom it helps bail out of prison, coupled with the remoteness and relative inaccessibility of those records within local jail files, has rendered opaque a critical accountability metric at a time when the U.S. is grappling with the effects of politically inspired violence.

Apart from the accused criminals it has sprung from prison, the Minnesota Freedom Fund last year was embroiled in additional, albeit comparatively minor, scandal in which its executive director, Tonja Honsey, was accused of impersonating a Native American woman.

The group was founded in 2016 by University of Minnesota student Simon Cecil. The group's tight resources originally limited it to cash bails below $1,000. Last year, in the case of the individual accused of shooting at the police, it was able to afford a $75,000 bail charge.
Read full article on Just the News

Just the News is a nonpartisan news media brand based in Washington, D.C. committed to just reporting facts from journalists.
Prev Next