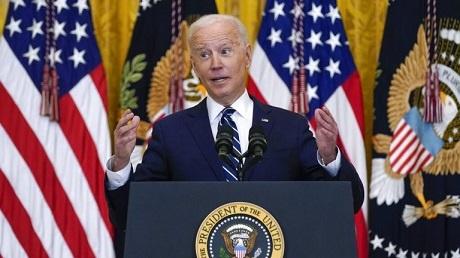 President Joe Biden speaks during a news conference in the East Room of the White House, Thursday, March 25, 2021, in Washington. (AP Photo/Evan Vucci)

Joe Biden stumbled through his first press briefing since taking office and only called on a pre-selected list of friendly reporters.

They had to give him a list of the reporters...

He kicked off Thursday’s briefing by setting a new goal of administering 200 million COVID-19 shots in his first 100 days. The Democrat made no mention of President Trump’s Operation Warp Speed, however, which facilitated the vaccine.

Biden also falsely claimed the U.S. has been doing a better job of vaccine distribution than any other country.

When grilled by reporters about the border crisis, Biden continued to blame Trump, the weather and the fact that he is a “nice guy.”

PBS explains away border crisis as a positive - caused because so many migrants simply trust Biden as a kind, generous, and noble leader who will take care of their kids.

Biden flattered so many are crossing border because he's "such a nice guy." @OANN #bidenpressconference pic.twitter.com/oZkEdB0Xkz

Biden said he doesn’t want to go to the border because it will cause too much of a stir. He also noted the media ban will end when he can implement his plan, which he failed to outline.
Read full article on One America News Network