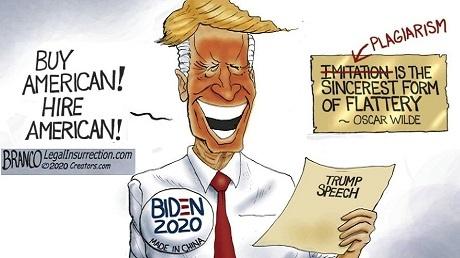 “But the previous administration didn’t take it seriously enough,” Biden claimed. “federal agencies waived the ‘Buy American’ requirement without much push back at all. ”

Critics have said this is a blatant lie as ‘Buy American’ was a key staple of President Trump’s policies on manufacturing and foreign trade. The Trump administration hosted ‘Made in America’ events and even imposed high-tariffs on imports to support U.S. manufacturers.

It's simple: When we spend taxpayer money, we should use it to buy products made in America and support jobs here at home. My Buy American Executive Order does just that. pic.twitter.com/N6mZU6lBi5

“Big corporations and special interest have long fought for loopholes to redirect American taxpayers dollars to foreign companies for the products being made.”

“The large corporations, who support terrible trade deals, that ship your jobs overseas and out of the country. The special interests, who want open borders, are donating to Hillary Clinton, definitely follow the money.”

Conservative analysts have said Biden is attempting to hijack President Trump’s achievements on trade and the economy with outright lies and plagiarism.