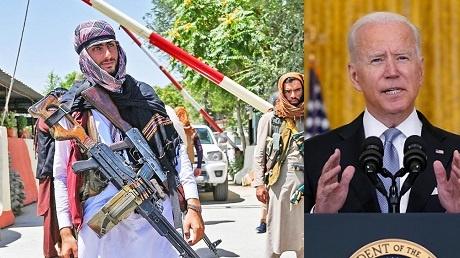 Biden's administration has no plan to evacuate Americans who are outside of Kabul.

According to a report published Tuesday, the United States has no plan to evacuate Americans out of the Kabul area.

The Washington Post quoted officials from the State and Defense departments, among others, as telling Senate staff members at a Tuesday morning meeting that they have no way to rescue Americans outside Kabul and would have to pass through a series of Taliban checkpoints.

The report, citing two Senate aides, stressed that with the main airport located in Kabul, the U.S. government has not developed a plan to repatriate Americans outside Kabul who would have to use a different airport if they could not reach the Afghan capital.

On Sunday, congressional staffers in Sen. Tom Cotton's (R-AK) office set up a hotline for Americans trapped in Afghanistan to call for help, Military Times reported.

In less than a day, the hotline received several hundred calls from people who had been unable to receive any directives or communication from the State Department or other officials on how to evacuate.

"The situation is dire, but we will do everything in our power to help keep them informed and help them get out," Cotton, a veteran who served in Afghanistan from 2008 to 2009, said in a statement.

It is estimated that as many as 15,000 Americans may still be in Afghanistan. The exact number of Americans outside Kabul has not yet been clarified, the Washington Post reported.

A former State Department contractor said in an interview with Fox News that the Taliban have now set up checkpoints throughout Kabul and at the city's airport, and there have been reports of people being beaten on their way to the airport.

On Monday, a State Department spokesman said the Kabul airport was "safe and secure" and that the Taliban had promised safe passage for U.S. and non-U.S. civilians.